Reflecting on “Niche” Commitments Made at Biarritz

On the heels of the 2019 G7 Summit, G7 countries along with Australia, Chile, India, Senegal, and the European Union announced a first wave of legislative commitments to promote gender equality. The “Biarritz Partnership” builds on the emphasis Canadian Prime Minister Justin Trudeau placed on gender equality through the 2018 Canadian G7, including through the creation of the G7 Gender Equality Advisory Council. Under his 2019 presidency, French President Emmanuel Macron elected to zero in on legislative commitments to ensure that the G7’s focus on gender equality resulted in increased concrete action by governments. Was the attempt successful? In a number of ways, yes.

Gender inequalities, far from being a “niche issue,” occur in rich and poor countries alike and are a drag on global progress

The Biarritz Partnership (as well as other commitments made by the G7 on women’s economic empowerment and sexual violence) placed a continued spotlight on gender equality throughout the G7 process. Contrary to the preferences of a widely quoted Trump administration aide, rather than being treated as a “niche” issue, this emphasis reflected the reality that gender inequalities persist across sectors and country contexts and hinder individual choice and well-being, human capital development, and inclusive growth. Though they may vary in precise form and severity, discriminatory laws, policies, and norms hold back women and girls in high-, middle-, and low-income countries alike.

The 2018 Gender Equality Advisory Council’s report (Making Gender Inequality History) is thorough and ambitious but reflected a lengthy, wide-ranging list of asks, which unfortunately didn’t result in concrete commitments by G7 governments outside of those focused on financing for girls’ education (where we know significant funds were repackaged, having already been committed through IDA and the Global Partnership for Education Replenishment) and women’s economic empowerment (through commitments made by G7 development finance institutions). At the request of the French government, the 2019 Gender Equality Advisory Council’s report allowed countries to react to increasingly concrete and targeted recommendations. 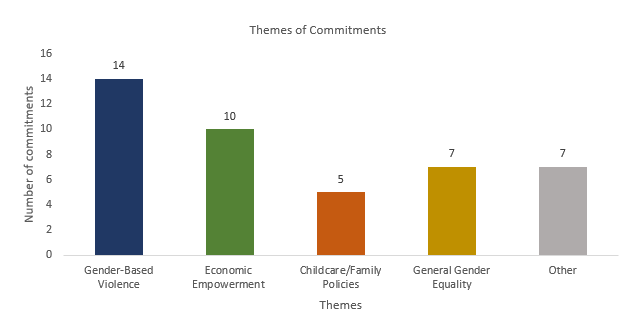 Note: “Other” refers to a range of issue-specific commitments, including those on STEM education, Women, Peace, and Security strategies, foreign policy, and fair housing.

But in other ways, it’s too soon to call the Biarritz Partnership a success.

The Biarritz Partnership, consistent with other deliverables from past G7 Summits and similar international gatherings, repackaged some country commitments

Overall, we see that just about half (51 percent) of the 43 commitments countries presented under the Biarritz Partnership discuss new laws or new actions to strengthen or otherwise amend existing ones. Note that this count reflects a broadly inclusive definition of “new” commitments. Some of these new commitments are expansions of existing policies (e.g., Germany’s expansion of the Act on Equal Participation of Women and Men in Executive Positions) or extensions of pre-existing strategies set to expire (e.g., Australia’s second National Action Plan on Women, Peace, and Security). Some don’t have specific details accompanying them (e.g., the United Kingdom’s commitment to “strengthen protections from sexual harassment in the workplace”).

Women's Economic Empowerment: What Works and How to Measure It

The other half of commitments largely refer to laws, policies, and strategies adopted prior to the Biarritz meetings, where governments now call for the implementation of these legislative frameworks (e.g., the European Union’s implementation of the Directive on Work-Life Balance for Parents and Careers), or are noncommittal in a concrete call to action (e.g., Canada’s consideration of initiatives aimed at ensuring access to capital for women entrepreneurs).

The right legislation to advance, protect, or sanction is an important step forward, but it is not enough

To be implemented fully, laws need to be funded and monitored with sanctions and incentives. A strong accountability mechanism to track countries’ progress will be key.

The Gender Equality Advisory Council recognized this and provided recommendations for how countries can be held accountable to follow through on commitments made under the Biarritz Partnership. Will their call for an accountability mechanism be answered?

Often, the best law is one that is drafted and approved in a receptive environment

France’s ‘parité’ law was largely ignored for the first few years after it was approved—it had landed in an environment where politics still was the domain of men, and parties were willing to draft counter legislation or pay fines rather than put women’s names in candidate lists. On the other hand, in supportive environments, progressive laws can make a real difference: for instance, the passage of a law criminalizing female genital mutilation/cutting in Burkina Faso may have averted over 200,000 incidents of FGM/C.

To fully implement progressive legislation in a supportive environment, we need sound rationales behind legislative commitments, backed by quality evidence of what works. We need to institute incentives compelling country action, and a robust accountability framework and metrics to track progress.

Ahead of forthcoming international gatherings, including next year’s G7 and Beijing +25, it will be critical to prioritize:

Ultimately, “making gender inequality history”—the intention of the G7 Gender Equality Advisory Council at its formation—will require countries to rely on rigorous evidence when making legislative and financing decisions, focusing on critical gaps and approaches proven to work in addressing them. And it will require accountability systems that move beyond self-reporting on vague commitments, to enable civil society advocates, researchers, and citizens alike to understand where progress is being made—and where more efforts are needed.