Following three years of protracted wrangling over the European Commission’s proposed new rules and financial instrument for development (and our blogs charting its evolution), on 18 March, EU member states and the European Parliament’s Foreign Affairs and Development Committees finally approved the new Neighbourhood, Development, and International Cooperation Instrument (NDICI)—Global Europe. The instrument, worth €79.5 billion over the period 2021-2027, marks a profound transformation of EU development policy and spending.

The significance of this new instrument can’t be overstated. The EU institutions are not only the third largest donor after the US and Germany, but also the second largest grant aid pool in volume terms, after the World Bank.

Below, we explore some of the key shifts that the new instrument will bring with it, and we set out some of the challenges we foresee in its implementation. There is no doubt that the redesign has rationalised and simplified what was a very complex and intertwined web of EU development finance instruments. Nevertheless, the new rules and targets run the risk of distorting the focus on the quality of assistance and blurring the lines of accountability.

The EU’s development finance architecture has evolved over time, partly as a result of the constraints imposed by the rigidity of the EU’s Multiannual Financial Framework (MFF). Pre-2021, EU external spending was extremely complex and fragmented. No fewer than 10 overlapping and incoherent financial instruments (excluding special funds) were designed for international development and humanitarian spending, with limited ability to address unforeseen events and emerging priorities. Under the new framework, in an effort to rationalise EU development spending, seven of the ten instruments were merged into a single instrument—the NDICI—including the off-budget European Development Fund (EDF) which finances cooperation with African, Caribbean, and Pacific (ACP) countries and the European Neighbourhood Instrument with countries on the periphery of the EU. The NDICI places at its core, cooperation with the EU’s two priority regions—sub-Saharan Africa and the Neighbourhood (the EU’s eastern and southern neighbours).

Source: Elaboration from the authors based on the proposal for a regulation of the European Parliament and of the Council establishing the Neighbourhood, Development and International Cooperation Instrument

The NDICI also puts forward a new investment framework for external action that consolidates the plethora of financial tools (the regional blending facilities, the Guarantee Fund for External Actions, the guarantee for the European Investment Bank (EIB), and the European Fund for Sustainable Development guarantee) into a single worldwide blending facility and a single guarantee mechanism (External Action Guarantee), which together form the European Fund for Sustainable Development Plus (EFSD+).

Figure 2 shows the multiple investment instruments pre-2021 and Figure 3 shows how they have been consolidated in the new framework. The EFSD+ may guarantee operations up to €53.4 billion—that’s almost 70 percent of the entire instrument—with each operation funded from the instrument’s geographic programme envelope. It is open to all eligible EU and non-EU counterpart institutions, with a view to creating a level playing field for bilateral and multilateral development finance institutions (DFIs), thereby breaking the “monopoly” of the EIB over EU guarantees.

However, unlike the bilateral DFIs that benefit from their respective national state guarantees, the EIB depends on the EU for sovereign guarantees. And thus, the NDICI sets aside three EIB-dedicated windows worth €26.7 billion. In terms of governance, the European Commission, together with the member states and the EIB, will all sit on the EFSD+ Strategic Board.

Figure 2. The EU development finance architecture under the 2014-2020 MFF

Figure 3. The EU development finance architecture under the 2021-2027 MFF

The new development-related commitments for 2021-2027 are something of a glass half-full (see our analysis of the outcome of the EU budget negotiations). As shown in Figure 4, the size of the EU’s external action has very slightly increased in constant prices, and its share of the EU’s overall budget (9.16 percent) has also somewhat improved, compared to the 2014-2020 period (8.7 percent). This in itself is a significant accomplishment, especially considering that the latter included the contributions of the UK, which the remaining 27 member states are thus fully covering from 2021. At the same time, the outcome disappoints, including for the European Commission, who had called for a significantly larger EU global development footprint. 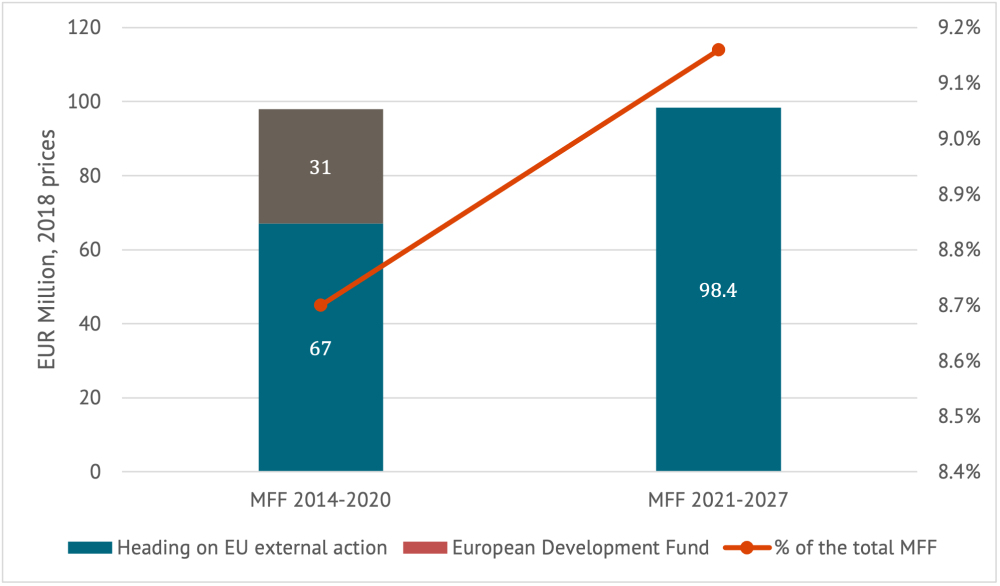 The increased focus on bilateral cooperation is a major shift in EU development cooperation. Geographic programmes now constitute the main source of development funding. Indeed, geographic programmes now account for 75 percent of the total financial envelope of the NDICI. As illustrated in Figure 5, of the €79.5 billion (in current prices), around €60 billion will be ring fenced for geographic programmes, including at least €19.3 billion for the Neighbourhood (an increase of €2 billion) and €29.1 for sub-Saharan Africa (no change). (See press release by the Council of the EU on 18th December 2020 and previous blog on the issue.)

While the focus on geographic spending programmed at country level over thematic priorities paves the way for a cooperation that is better aligned with the objectives and needs of partner countries, there is a risk that, with less funding, global challenges may be neglected. 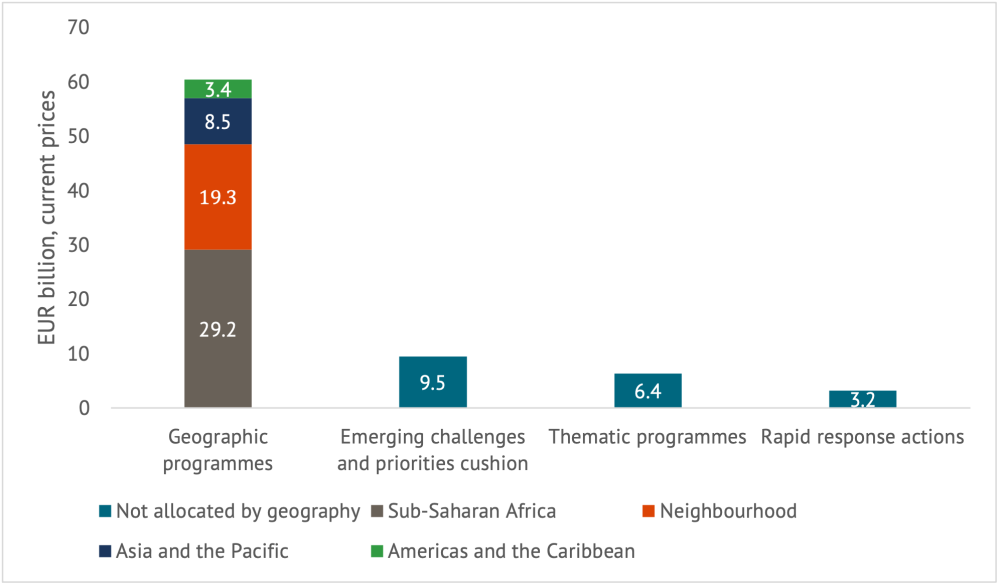 Source: Proposal for a regulation of the European Parliament and of the Council establishing the Neighbourhood, Development and International Cooperation Instrument

The NDICI is aligned to a number of the EU’s international commitments, including the Paris Agreement on Climate Change. It sets a spending target of 30 percent for climate objectives. It reiterates the age-old commitment to provide 0.2 percent of GNI for aid to least developed countries (LDCs) by 2030. And it sets a benchmark of 93 percent of EU development assistance to qualify as Official Development Assistance (ODA) as defined by the OECD Development Assistance Committee (DAC), demonstrating the EU’s compliance with adherence to international norms and standards.

Additional spending targets have also been set for thematic priorities. Ten percent of the financial envelope has been allocated to “actions supporting management and governance of migration and forced displacement,” and 20 percent to social inclusion and human development, including basic social services such as health, education, water, nutrition, water, sanitation and hygiene, and social protection.

The creation of a flexibility cushion and a rapid response pillar are the real radicals in this budget. They consist of €9.5 billion for unforeseen events, emerging challenges, and new priorities, and €3.2 billion for crisis response. That’s almost 16 percent of the entire development instrument unallocated and unprogrammed. Considering the lack of budgetary space in its response to COVID-19, and the scrambling for funds that followed thereafter, these new flexibility mechanisms are, undoubtedly, useful and long-anticipated additions to the EU’s toolbox.

The NDICI gives new impetus to greater collaboration between European development actors. The rules governing the instrument specify that “joint programming” is the preferred approach for country programming. This gives the European Commission the legal backing to make the Team Europe approach—combining its own expertise and funding with that of the member states and the European development finance institutions—the norm rather than the exception. Joint programming is already actively ongoing in 79 countries, although, to date, only 22 joint strategies have been signed. However, although joint programming is emphasised as preferable, joint strategies and implementation, remain voluntary.

While there is much to herald with this more rational configuration of EU development assistance, the new instrument does bring with it some challenges.

The first challenge is in relation to the “annuality” principle of the EU budget. While the EU budget is established on an annual basis by the Budgetary Authority (the Council and the European Parliament), the off-budget EDF for cooperation with the ACP was established for a seven-year period as a multiannual rolling fund, with contributions being provided by the member states as needed. Under the annual budget process, the level of commitments and disbursements that are possible are defined both by the terms of the MFF and the budget adopted for the year. Although there is a provision in the NDICI that allows for unused commitments to be carried over into the following year, it does set a deadline of the end of the year for disbursement. There are two consequences of this:

The second challenge relates to the plethora of earmarked funds and spending targets. While spending targets demonstrate prioritisation and commitment to a particular issue, the NDICI contains no fewer than five of them. Tracking these targets will be no easy feat and may encourage the use of ‘loose’ definitions for which actions qualify. Furthermore, excessive focus on achieving the targets and volume of funds may result in a tendency to overlook the quality of actions, thereby diluting their overall development impact.

Despite the NDICI only having just been approved by the European Parliament committees, programming of the funds is in full swing. There will most likely be some statement from parliamentarians reasserting their demand for strategic oversight and guidance over development spending. The European Commission has promised it will oblige in the form of a “high-level political dialogue” with the parliament twice a year. It remains to be seen whether this will suffice.

With thanks to Anita Käppeli for her comments.

Note: On 4/6/21, this blog was corrected to reflect the possibility under the NDICI to carry unused commitments over in the following financial year.