Overcoming Myopia Before It Kills Us – Ian Goldin 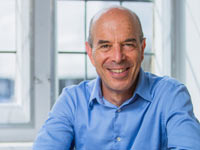 It’s human nature to focus first on what’s immediately in front of us. That’s usually a good thing: it keeps us from tripping. But this tendency towards myopia also has huge risks, especially when it drives national and international policy agendas. Just compare the G-20 alacrity in responding to the 2007-08 global financial crisis to international foot dragging on climate change, despite scientists’ warning that Earth is headed for a scorching 4 degree Celsius increase in the average global temperature by the end of the century. Myopia indeed.

Is it possible to alter national governments and global institutions so that decision makers can focus on the vitally important longer term challenges, while still dealing with the urgent considerations which crowd their daily agenda? That’s the important and difficult question set before the The Oxford Martin Commission for Future Generations, chaired by outgoing Director-General of the World Trade Organization Pascal Lamy.

My guest on this week’s Wonkcast is Ian Goldin, director of the Oxford Martin School and the driving force behind the commission.

But while I’m sympathetic to the Commission’s goal and impressed with its membership, I’m skeptical that any commission can make much of a difference in addressing such a profound human flaw.  Ian thinks otherwise.

“This sort of caliber of people knows the international system and has thought a lot about how to reform it,” he tells me. “What we aim to do is to come up with some really practical ideas on how to unlock the gridlock in politics to make people think and act on the long term.”

“There's a lot of knowledge out there on what the issues are but very little action and what we’re trying to do is bridge that gap…There’s a sense that this combination of people from different countries and perspectives can provide their experience and through their ability to mobilize opinion, can make a difference.”

The Commission is not lacking in expert resources.  Founded with a major gift from James Martin, the British technology author and leading expert in fields such as system design and computer-aided software engineering, the Oxford Martin School brings together more than 300 scholars working across 27 disciplines to address the most complex challenges of the 21st century.

Martin “believes that this will either be our best century -- a century where we overcome poverty and disease -- or it could be our worst because we destroy a bunch of the past century’s achievements,” Ian tells me.

“And he believes the outcomes will depend on our ability to mobilize ideas. So bringing great minds together, working on the toughest issues, and connecting them to policy and business world is absolutely crucial.”

It’s a worthy goal and I hope that my skepticism is proven wrong.

The Commission is expected to issue its report in the fall—provided it can come up with useful answers. Ian says he has told the commissioners there is no need for a report unless there are solid, practical recommendations. Though Ian doesn’t say so, I suspect he has some of his own ideas about solutions: he is the author of a new book: Divided Nations: Why Global Governance is Failing and What We Can Do About It.

Listen to the Wonkcast to learn more. And stay tuned for an update in the fall.

Thanks to Alex Gordon for producing the Wonkcast.