Message from Oslo REDD Exchange: Let’s Get On With It! 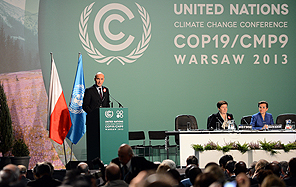 Last week I had the pleasure of chairing the 2013 Oslo REDD Exchange, a conference hosted by the Government of Norway’s International Climate and Forests Initiative.  The conference drew some 500 policy-makers and practitioners working on reducing deforestation around the world -- through strategies ranging from international negotiations to community-level projects – to assess the state of play on REDD+ and to chart a way forward.

Tine Sundtoft, Norway’s Minister of Climate and Environment, opened the conference with welcome assurance that the newly-elected government will maintain Norway’s commitment to REDD+.   Norway’s leadership on the forests and climate change agenda has been crucial, not least through its allocation of billions of dollars  to partner countries in exchange for reductions in deforestation. (For more on this pioneering work, see Nancy Birdsall’s post OECD Dispute with Oslo has a Bad ODA on Norway’s innovative financing of Brazil’s Amazon Fund.)

Conference discussions also revealed a subtle but significant shift in the framing of REDD+ in domestic policy arenas.  In the past, REDD+ was mostly seen as an effort to reduce emissions from forest loss into which other objectives—such as poverty reduction, human rights protection, or biodiversity conservation—needed to be assured through “safeguards.” In Oslo, although the “do no harm” agenda was still squarely on the table, REDD+ was much more likely to be framed as an instrument that stakeholders in forest countries could deploy to advance their own domestic objectives.

One example of this was the attention to the potential of REDD+ to help clarify and strengthen forest tenure rights, not least for indigenous peoples.  When asked to select the highest priority for attention to REDD+ safeguards and synergies, more than half of conference participants voted for “land tenure and rights.”  More broadly, when asked to identify the highest priority for action in forest countries, two-thirds of conference participants selected either “link REDD+ to poverty reduction, food security, and adaptation to climate change” or “link REDD+ to transformational change with respect to tenure, community rights, and gender.” “(See full results  from the conference poll.)

In sum, for me the conference reinforced two messages:

(2)    Within forest countries, REDD+ will be most successful when framed as an instrument to achieve objectives that are important to domestic constituencies, such as improved forest governance and resilience to climate change.

Let’s get on with it.