Measuring the Reproductive Ecosystem: Modern Contraception and Women’s Empowerment in the Developing World

Modern contraception may be the single most important technology for development—it liberates women to think ahead, as men have always been able to do. Last month, CGD hosted the Third Annual Birdsall House Conference on Women: “Reproductive Choices to Life Chances: New and Existing Evidence on the Impact of Contraception on Women’s Empowerment.” The conference featured presentations from some of the world’s top scholars. You can check out a summary of the research findings from papers at the conference and in the literature.

In my presentation I gave a preview of ongoing work with colleagues here at CGD to define and measure an unobservable variable likely to affect women’s empowerment: the “reproductive ecosystem.” We define it as some combination of social norms, economic realities, laws and customs, and access to contraception that in developing countries affects girls’ and women’s “agency” on reproductive matters, and invites or not women to plan whether and when they will have children.

The reproductive ecosystem includes elements of both demand for contraception on the part of individual women (Is it socially acceptable to delay marriage and childbearing?), and supply (Is there a health clinic with contraceptive products nearby?). I think of it as something that a 10-year-old girl can “see” about the world she inhabits, with respect to her future roles in the family, community, and society—roles that for all women, whether they have children or not, are affected by the social expectation that they can.

Our objective is to develop a measure of the reproductive ecosystem across developing countries and over time (since about 1990), and ask whether differences across countries and changes within countries can be associated (subsequently) with women’s empowerment. For example, does a law prohibiting marriage before age 18 affect current or subsequent changes in girls’ education and women’s participation in the formal, paid labor force?

As a summary measure of the social context that matters peculiarly for women, the reproductive ecosystem helps define what the 10-year-old girl—whether in New York, Cairo, Bogota, or Dakar—can imagine about her future, and in addition what her parents and her community can imagine. What combination of children and “career” (or own-earnings) is open to her? How close is that imagined future to the one her brother can imagine? How does that affect her own and her parents’ decisions about investing in her future?

In the United States, the “power of the pill” was mostly about supply of a new technology

In the United States, the reproductive ecosystem changed dramatically in the late 1960s with the introduction of the contraceptive pill. Take-up of the pill grew rapidly in the 1970s, and an increase in women’s enrollment in professional education followed suit almost immediately (see chart). Jay Lindo, in this conference presentation (a tour de force, IMHO) referring to his own and others’ work using US data over the last five decades (“power of the pill” studies), explained how economists have used data on variation in access and cost to contraception (and abortion) to tease out causality—from greater access to greater empowerment of women—including higher wages decades later. 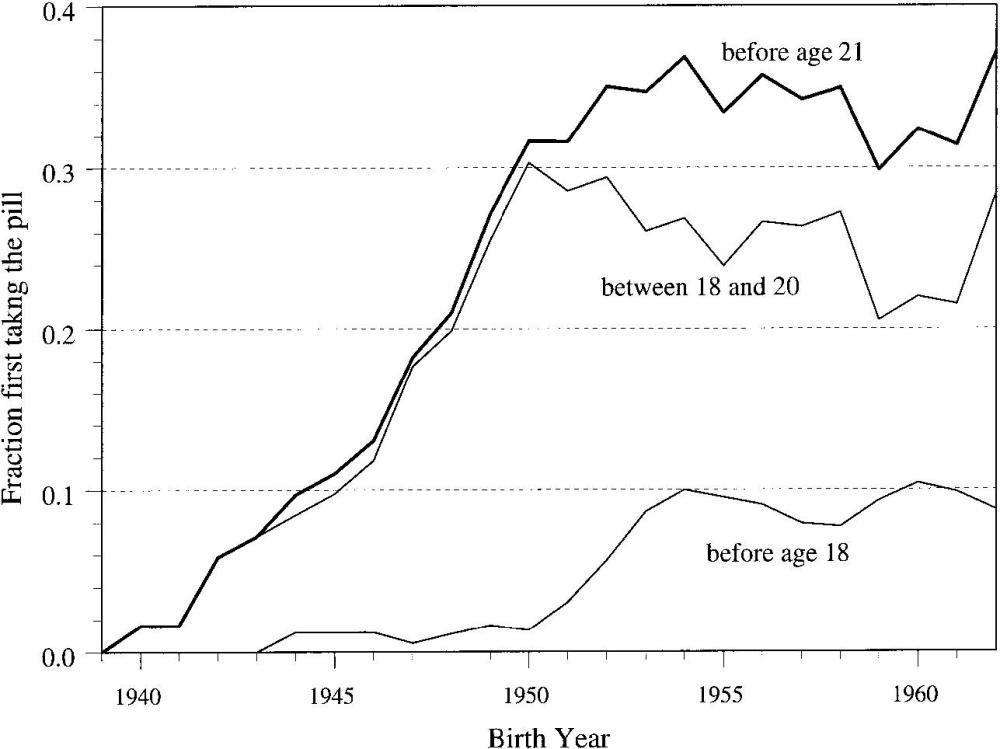 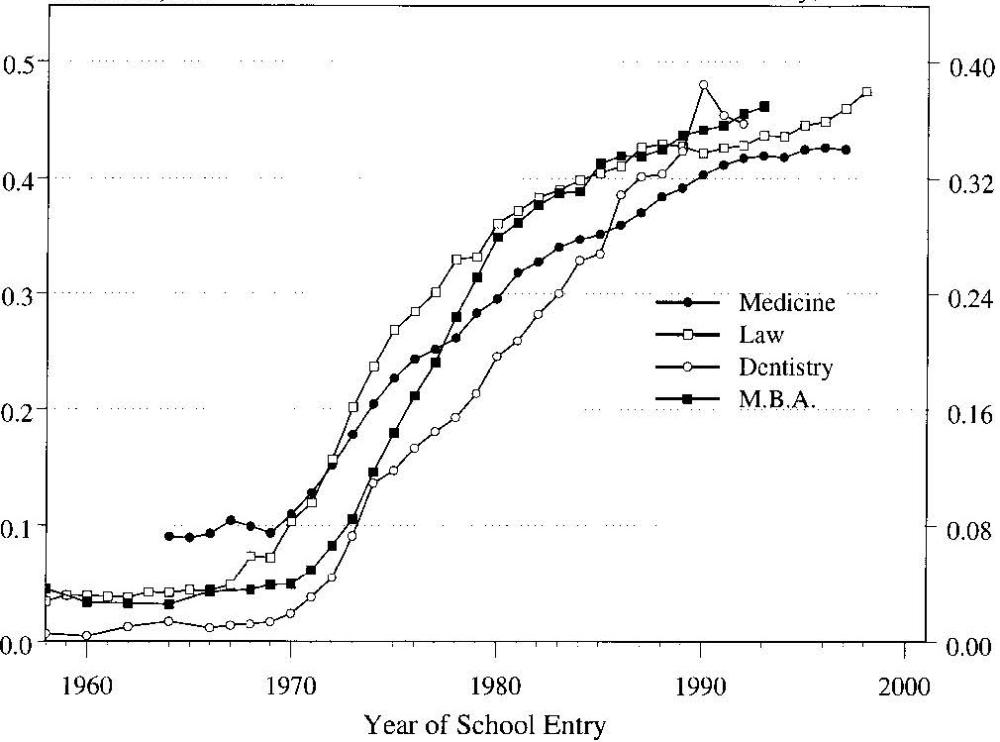 What about developing countries?

But over the last 30-40 years the pill and other modern contraceptive methods have been introduced in the developing world, where women have less education on average than women in the US in the late 1960s and were and still are, on average, poorer. The conditions for rapid uptake of contraception were not and have not been as propitious as in the US. New and better contraception is not like a new vaccine, almost universally taken up to avoid disease and death, or even like the mobile phone. Fertility and family are deeply sensitive subjects in every society; the decision to use contraception is heavily mediated not only by education and income, but by religion, prevailing social norms, and culture—and of course, the status or “rights” of women to make choices in the first place. Causality from supply of a new technology that matters for women to women’s empowerment is harder to assess.

Two papers presented at the conference may be among the first to do so rigorously, using household survey and other data from Malaysia and Colombia. In Malaysia, the authors use the natural experiment of differential access over time in different communities to show that greater (earlier) access is associated with greater schooling for girls. They emphasize the “indirect” or “incentive” effect at the community level; in communities where family planning became a known option, girls stayed in school longer, independent of whether their own mothers used contraception.

How can we address the same question across many developing countries and over time? Have elements of the “reproductive ecosystem” (on both the demand and supply side of use of contraception) that have varied over time and across countries mediated the effect of access to contraception on country and time-specific measures of women’s empowerment?

Measuring and validating the concept of “reproductive ecosystem”

To characterize the reproductive ecosystem in any one place at any one point in time (across many developing countries over the last three decades), we are putting together data from multiple sources, including: attitude data about women’s roles from the World Values Survey, e.g. whether a university education is more important for boys than girls, or if men have more of a right to scarce jobs than women; Demographic and Health survey data at the country level (and urban/rural within countries) on the social acceptance of contraception, e.g. the prevalence of “opposition” to contraception that women report; and data on observable country-year behavior of adult women, e.g. the percentage of women who work outside the home for wage or salary income. Other possibilities suggested by conference participants include laws that affect women’s ability to own property, at least on paper; prevalence of female genital mutilation; and measures of media access to alternative lifestyles of women (the famous example being that of soap operas in Brazil).

One way to validate any connection from these societal/country variables to women’s empowerment is to focus on women’s apparent decisions to time pregnancies, including to delay marriage, to delay their first birth, and to use contraception before they have any births at all—something I proposed 30 years ago (!) in this article and as was the case for women in their 20s in the United States in the early 1970s. These variables are more likely to reflect women’s “agency” in reproductive behavior than do traditional variables such as overall use of contraception or average number of children. The issue for women may not in fact be how many children to have—which has been the focus of efforts to improve access to contraception for decades—but when, if ever, to get pregnant. (For a tantalizing indication that these decisions have been changing in the developing world, compare slides 10 and 12 of my colleague Rachel Silverman’s conference presentation.) The US story indicates that starting in the 1970s, young women were confident, taking the contraceptive pill, that they could combine sex (and even marriage) with a partner with going to law or medical school—assured they could put off pregnancy, and that professional education made sense for them; they could imagine combining children and career with lower risk and higher return. As in the case of an indirect effect in Malaysia, we can surmise that in the 1970s admissions committees of medical and law schools also became more willing to admit women—knowing that women had control over the timing of any pregnancies both while in school and during any resulting career. The key point is that women can be empowered simply by the prevalence of contraception, independent of their own immediate choices.

From a modelling point of view, we are attacking two questions. First, what indicators of the reproductive ecosystem measured at the country level (including the demand side and the supply side, both of which affect the total cost of women choosing to plan births) affect measures of whether women are timing (including delaying) births at that time in that place? Second: with lags of about 15 years, is there an observable association across countries and/or over time between differences in “reproductive ecosystems” and differences in measures of women’s empowerment?

Why is this work potentially policy relevant? Compared to 30 years ago, greater access to modern contraception is clearly associated with greater use (with modern method usage now as high as 63 percent in Kenya, 54 percent in Bangladesh, and 48 percent in India)—and probably to some extent with lower fertility (with the total fertility rate 3.9 per woman in Kenya, 2.1 in Bangladesh, and 2.4 in India (WDI)). But whether and why greater access is associated (or not) with increases in women’s empowerment is less clear—and if not why not? We have compelling evidence in the Malaysia case that at the community level, greater access to contraception can be causally linked to the likelihood that girls will stay longer in school. But would that be equally true in India and Senegal? What else besides “access” feeds through to measures of women’s empowerment? And over what time periods? It may be that in some settings it is patriarchy itself that matters. It may be that the next best investment for empowering women (and ultimately for development itself) is a direct effort to change aspects of what we are calling the reproductive ecosystem. Undoing laws and customs affecting property rights for women, in a virtuous circle, might itself undo the patriarchy that discourages girls from delaying marriage to finish secondary school and earning an independent living—and by undoing patriarchy, fuels growth and development. 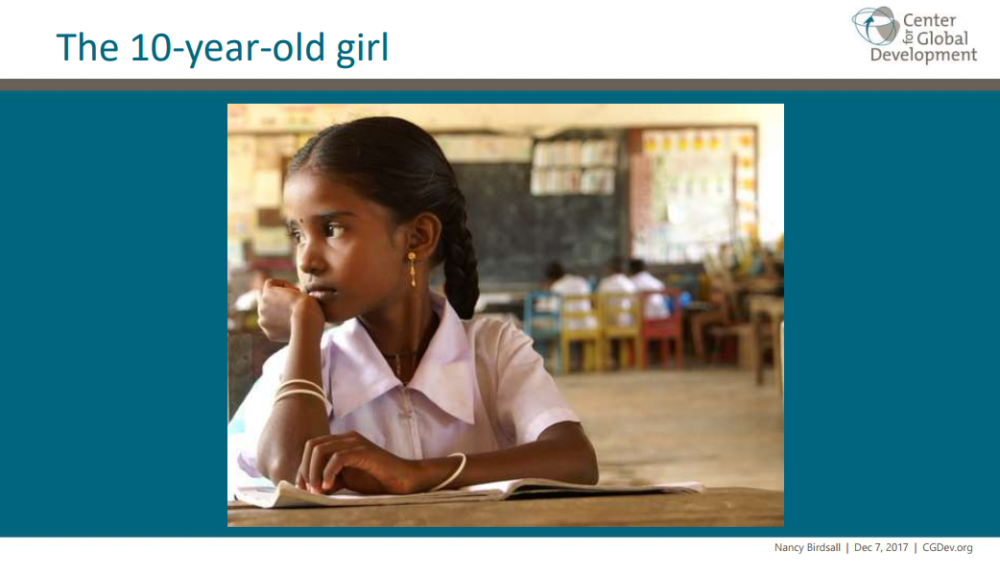 Meanwhile, we are looking for whatever indicators are out there of the reproductive ecosystem, while exploring the potential of what is, as always, limited data to test our alternative models of reproduction and empowerment across societies. We have data challenges and statistical/econometric challenges. We welcome your suggestions (comment below) on data that would help us represent the reproductive ecosystem—and help create a better future for today’s 10-year-old girls across the developing world.