Making AGOA More Effective – Is Congress Getting the Information It Needs? | Center for Global Development | Ideas to Action Skip to main content

Making AGOA More Effective – Is Congress Getting the Information It Needs?

Congress will soon make some big trade policy decisions that impact Sub-Saharan Africa.  The Africa Growth and Opportunity Act (AGOA), which provides duty free access to the $17 trillion US market for qualifying African countries, is set to expire this fall.  Word on the street is that draft legislation will be dropped in the coming weeks, which suggests that another extension is likely.  What’s unclear is whether Congress will grapple with the factors that have long constrained US-Africa trade flows.  Namely, most African firms are smothered by fickle and costly business climates that price them out of US and other global markets.  Put differently, boosting US-Africa trade ain’t just about access, it’s about improving competitiveness.  So, if Congress wants to use AGOA as a policy lever for incentivizing market-friendly reforms and promoting broad-based prosperity, then significant changes are required.  Unfortunately, Congress’s in-house source for non-partisan analysis, the Government Accountability Office (GAO), has missed this point entirely.

One revision, key to unlocking greater opportunity for African firms, is reforming how the US government implements AGOA country eligibility decisions.  AGOA originally was established as a compact with African governments, not altogether dissimilar from the model later employed by the Millennium Challenge Corporation.  A grand bargain that offered the promise of greater US market access for countries that demonstrate “continuing progress” towards democratic pluralism, free markets, rule of law, and the protection of human and worker rights.  While Congress created these eligibility criteria equally, they have been implemented in highly unequal ways by the executive branch.  The US has never revoked (or granted) AGOA benefits on the basis of economic governance.  But the reality is that property rights, corruption, customs procedures, and other elements of the business climate directly impact whether African firms can become globally competitive, make use of AGOA preferences, and contribute to job creation and economic growth.  My CGD colleague, Vijaya Ramachandran, and I proposed some options for fixing this going forward (see my related congressional testimony here).

Unfortunately, Congress’s in-house source for non-partisan analysis largely failed to address the gap between AGOA’s original vision and executive branch decisions about country eligibility.  In a new report, the GAO was silent on whether AGOA-eligible countries have actually demonstrated “continuing progress” on economic, political, and development reform objectives over time.  This could have been achieved by examining publicly available indicators (see graph below) and past AGOA review reports produced by USTR and other agencies, which are not publicly available.  Then, GAO could have detailed whether and/or how US agencies factored this information into their annual eligibility recommendations to the President. 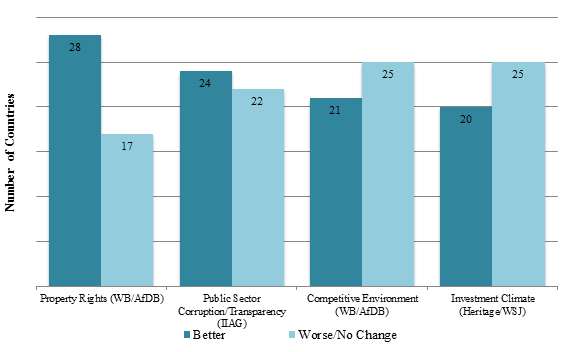 Instead, the GAO simply inventoried the bureaucratic steps of the annual AGOA review process (which actually is the best summary I’ve seen) and the handful of African countries that have lost eligibility, typically because of a military coup or gross human rights violations.  It also ran a bunch of simplistic, endogenous correlations on whether AGOA-eligible countries have fared better than the handful of basket case countries that have not received AGOA preferences.  I’ll spare you the suspense – Ghana and Rwanda have achieved better economic outcomes than Somalia and Zimbabwe.  Not particularly instructive information for US policymakers.

GAO typically produces high-quality, thoughtful findings that help inform lawmakers’ policy positions.  Politics come into play, but the GAO helps to frame the decisions through solid non-partisan analysis.  That’s why this report is so disappointing.  Congress may ultimately decide to maintain the status quo and incentivize economic reforms through other means.  But, first it needs to know that AGOA isn’t being implemented the way it was designed.  In that context, GAO has done Congress a disservice.