The COVID-19 pandemic has left a large dent in the government budgets of low-income countries (LIDCs). During 2020, they had no choice but to increase public spending to fight the pandemic at a time when shrinking economic activity depressed their revenues. Consequently, public debt rose by 5 percentage points on average in this group of countries in 2020, to 46 percent of GDP. This happened despite the delivery of more than $5 billion in relief to over 40 LIDCs under the Group of Twenty (G20) Debt Service Suspension Initiative launched in May 2020. A $650 billion increase in IMF reserve assets—Special Drawing Rights (SDRs)—could be distributed to member countries in August 2021 with about $23 billion going to sub-Saharan African countries. Discussions are currently underway to devise a mechanism allowing advanced economies to on-lend part of their SDRs, to expand concessional resources available to LIDCs. The recently concluded Group of Seven (G7) meeting set a goal of $100 billion SDR contributions from advanced economies to support the poorest and most vulnerable countries in dealing with the consequences of the pandemic.

In this blog post, we argue that while these efforts to expand the flow of concessional resources to LIDCs are laudable, they are unlikely to be sufficient and, going forward, some form of debt relief will be necessary to secure fiscal sustainability down the road for these countries. Our argument is based on a detailed analysis of the experience with fiscal tightening in LIDCs during 1979-2019 using a more comprehensive database than previously employed (the full set of results will be made available in a forthcoming paper). Absent debt relief, LIDCs are likely to suffer from uneven growth and a worsening of income inequality. Already, more than half of the LIDCs (36 of 59) are either in or at high risk of debt distress. The average interest payments as a share of GDP of LIDCs have risen to almost 1.6 percent in 2019/20, similar to the level prevailing prior to the launch of the Heavily Indebted Poor Countries (HIPC) Initiative in 1996. The rising share of interest payments in more recent years reflects the changing composition of debt, with a growing proportion of non-concessional borrowing.

LIDCs are expected to tighten their fiscal position in the coming years to help contain further increases in debt. This emerges from the analysis presented in the IMF’s April 2021 Fiscal Monitor, which projects a median improvement in the primary fiscal balance (the budget balance net of interest payments) of 2.5 percentage points of GDP between 2020 and 2025 for 40 LIDCs. Fiscal tightening is expected to take place in over 90 percent of these LIDCs.

What can we learn from past episodes of fiscal tightening? 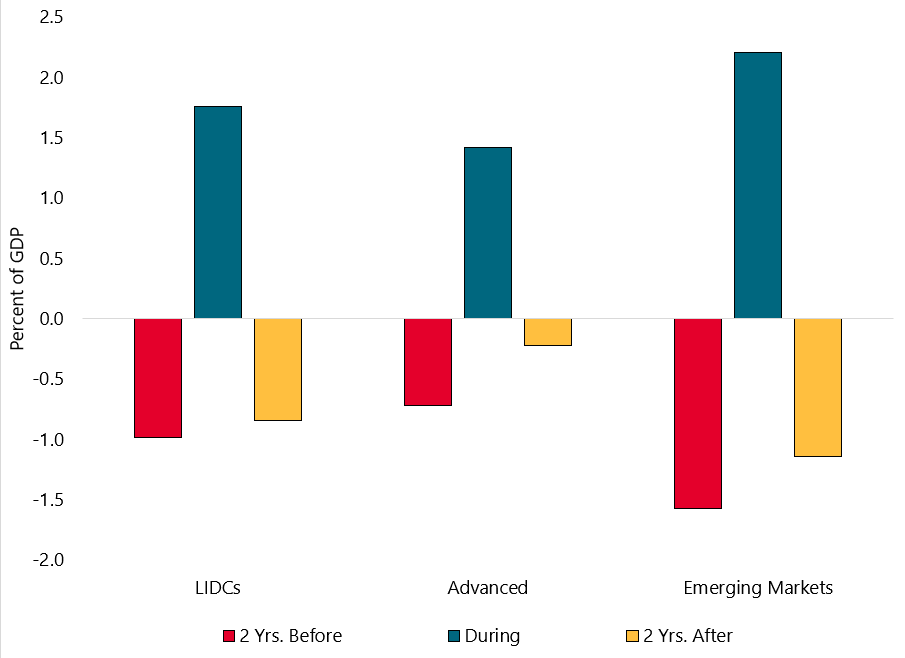 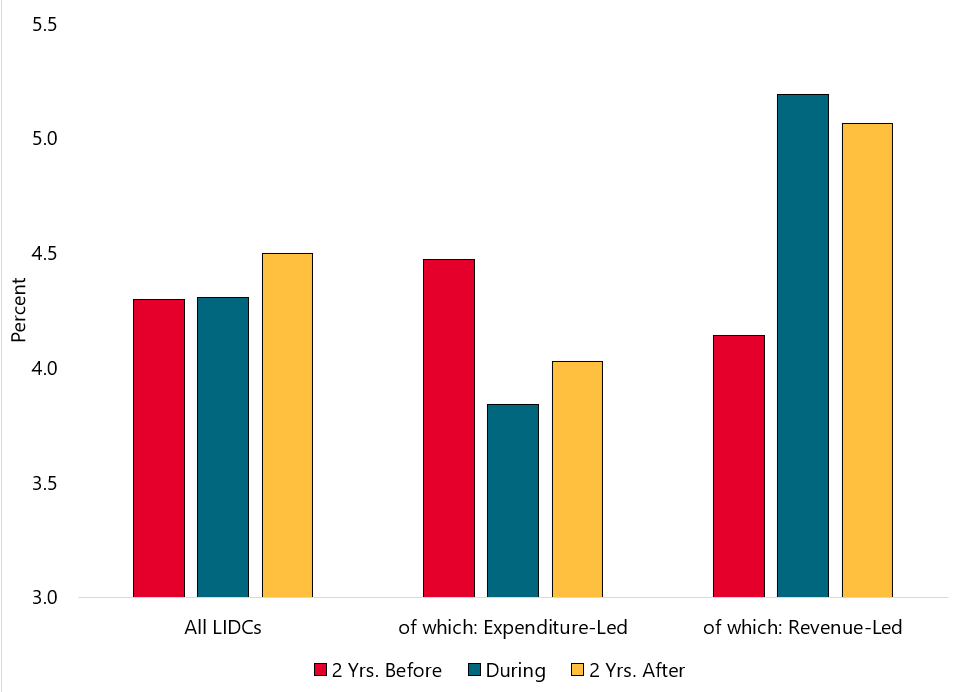 Source: Authors’ calculations using the HP filter and data from the April 2021 IMF World Economic Outlook (WEO) Database. Note: Median real GDP growth rates are calculated for a sample of 116 fiscal tightening episodes in LIDCs (of which 67 are classified as expenditure-led and 49 as revenue-led) during the period 1979-2019. A fiscal tightening episode is defined as expenditure-led if the cumulative change in the primary expenditure-to-GDP ratio divided by the cumulative adjustment (defined as the sum of all annual changes in the CAPB-to-GDP ratio) is larger than (or equal to) 0.5 (with the episode being defined as “revenue-led” otherwise). See Figure 1 for further elaboration.

Fourth, revenue-led fiscal tightening is associated with much lower public debt (by about three times) relative to expenditure-led tightening (Figure 3). While fiscal tightening does lower public debt, LIDCs adopt this policy infrequently (see point 1 above) and do not persist with it over a long period. What is more, a smaller proportion (42 percent) of fiscal tightening episodes in LIDCs is driven by increased mobilization of domestic revenues. In any case, it would seem inappropriate at this stage to embark on fiscal tightening when the IMF has estimated that scarring from the COVID-19 pandemic has raised average spending by 2.5 percent of GDP in LIDCs, over and above the amounts needed to meet the Sustainable Development Goals by 2030.

Figure 3. Median annual change in gross debt in LIDCS around a fiscal tightening, by tightening type 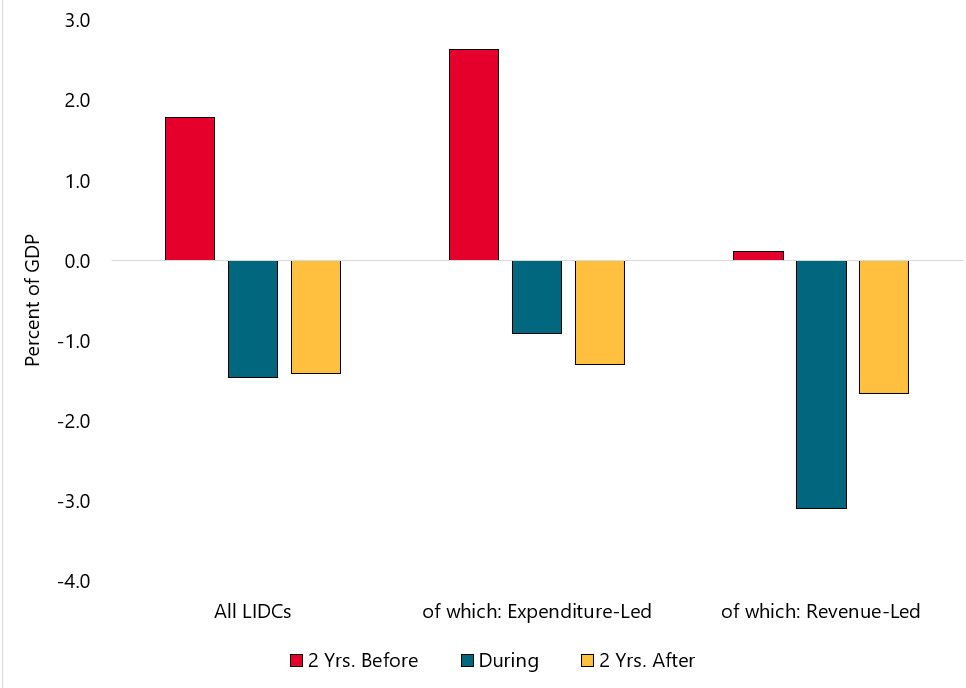 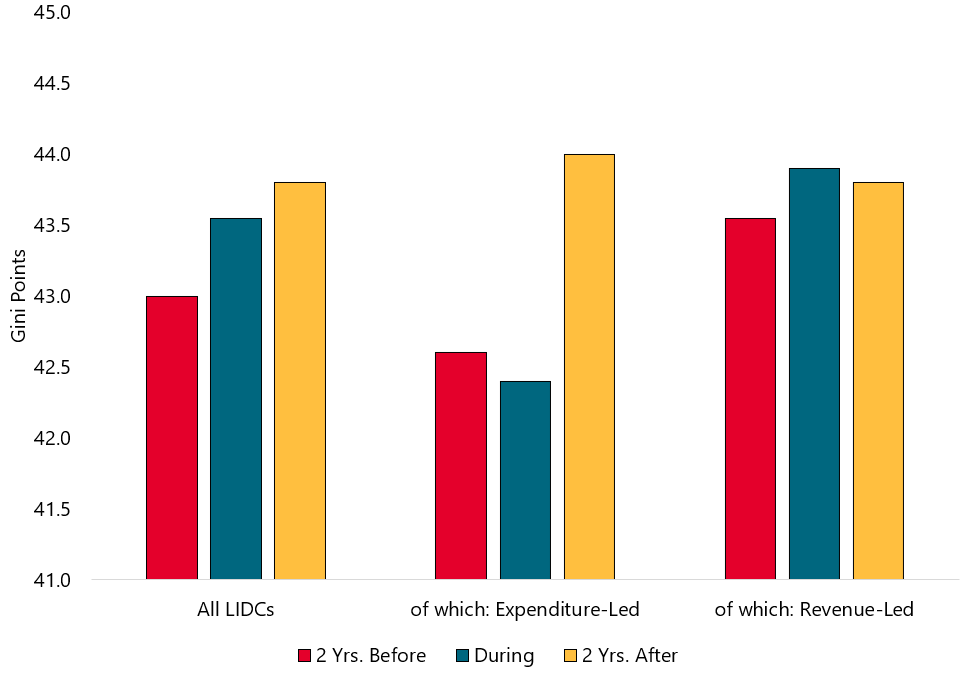 The above results have important implications for fiscal policy design in LIDCs and the need for additional external flows. First, with expenditure needs rising in the aftermath of the COVID-19 pandemic, LIDCs are likely to find it difficult to embark on fiscal tightening to reduce their debt-to-GDP ratios. This implies that debt forgiveness may need to be part of the package to help LIDCs get debt back to its pre-COVID-19 pandemic levels. Second, countries are rarely able to stick with fiscal tightening for a very long time. Thus, some allowance for slippages should be incorporated into fiscal projections. Third, the design of fiscal tightening seems to matter for performance. Revenue-led tightening is associated with larger debt reductions compared to tightening based on expenditure cuts. And, finally, fiscal tightening tends to be associated with higher inequality, underscoring the potential need for safety nets to compensate vulnerable groups.

Benedict Clements is a Professor at the Universidad de las Américas en Ecuador.

João Tovar Jalles is an Assistant Professor at the University of Lisbon.

Victor Mylonas is a graduate student at the University of Chicago.

Blog Post
Half a Trillion in Dry Powder? The Time for MDB Financial...
Clemence Landers and Rakan Aboneaaj

Blog Post
Lagos to Mombasa: How Does the Pandemic End in Africa?
W. Gyude Moore