Last year in Science magazine a collection of luminaries (nine authors, two from MIT, two from Yale, etc.) published what many regard as “gold standard” evidence about the impact of a “gold standard” anti-poverty program. The program is a multifaceted program that has six elements: (1) a productive asset transfer, (2) consumption support, (3) technical skills training, (4) high frequency home visits, (5) a savings program, (6) some health education. The program was evaluated in six country sites and was evaluated using a randomized control trial (RCT).

The program produced substantial gains in households’ annual consumption of nondurables in the third year after the productive asset transfer and one year after the end of the program intervention. Given the litany of income generating programs that have failed to have a sustained impact, this news of a sustained (even if only in year 3) gain in household consumption from a targeted anti-poverty program was widely regarded as very good news (see Table 1, column 1, below).

The paper assumes the gains in year 3 will be sustained forever and calculates the NPV (net present value, the sum of all costs and gains, discounted by how far in the future they occur) of the program (in PPP $) at a five percent discount rate (Table 1, column 2). The total gains are impressively large (partly because NPV at 5 percent discount rate multiplies the annual gain by roughly a factor of 20).

Of course this program, being multifaceted, is not cheap. The NPV of costs varies across countries between $1,500 and $6,000 per household. Averaged across the countries besides Honduras (where incomes fell because the “productive asset” transferred was livestock that died), by year 3 the program had spent $4,545 per household and each household’s nondurables consumption was higher in year 3 by $344.

But, with the assumptions (debatable, but we’ll roll with them)—(a) the gains in year 3 are sustained forever and (b) a low discount rate (5 percent)—then the net benefits are substantial and pass a standard benefit/cost test.

Let’s call this debatably but not unreasonably “the best you can do”—that is, if you were looking to augment the incomes of poor people programmatically in situ this intervention has both rigorous evidence across multiple contexts and that evidence suggests program efficacy on its side. (The advocates for “direct cash transfer” could make a case it doesn’t surpass the “index fund”-like benchmark of just giving the households the program costs in cash ($4,500), and they might be right, but just for my argument’s sake let’s assume this program is the gold standard).

Table 1. Rigorous evidence about an anti-poverty program shows (mostly) sustained positive gains—but the total lifetime magnitude is about a third of a year working in the USA versus their own country for a low skill worker.

Now, what is the least “you” (as a rich country citizen) could do for the world’s poor? The least you could do is “let their people come” (at least some of their people and in some modality). This is the least that you can do, as it costs you, the typical rich country citizen, nothing. Since these newly-arrived workers would willingly work at jobs that employers would willingly pay them to do at the prevailing wage, a program could easily be designed that produced positive job possibilities for existing American-born workers and hence zero wage loss for those people already here. (Even the existing migration has near zero loss for almost all ‘indigenous’ workers (Ottavio and Peri) so a program aimed to minimize wage impact could likely do even better). And the public finance implications of labor mobility are roughly whatever the program wants them to be as this is a feature of program design. Rather than costing $4500 per beneficiary this has cost zero to you.

The free lunch is available because of the different place-specific productivities (or TFP if you will) so that workers with equal intrinsic productivity (or “human capital”) make higher wages working in a more productive place even without reducing the TFP available to all other workers. Hence the additional product of the poor person working in a rich country is a net gain in output. The least you can do at the margin for the global poor is to just let them (and only of course those who want to) work in your high productivity environment instead of using the coercion of your nation-state to keep them trapped in the low productivity place they happened to be born in (imagine what you would want if you were born there and they were born here).

Figure 1. The annual gain from a gold standard poverty program is roughly 1/40th the wage differential of low skill workers from these countries working in their country versus the USA 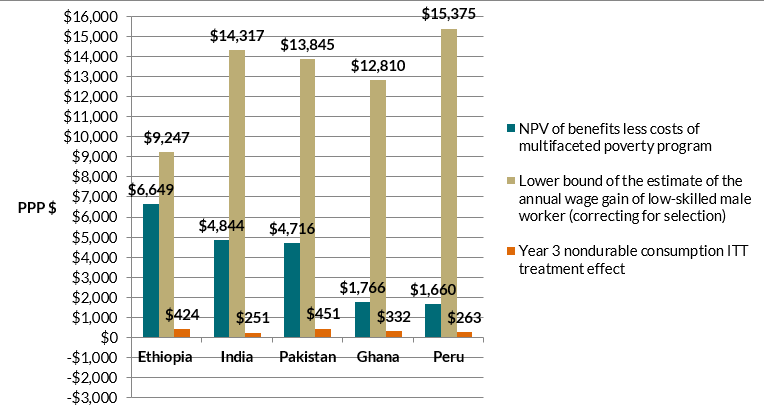 So, I am all for searching for evidence and discovering and then doing the best we can do in terms of in situ poverty programs, but why not also do some of the least we can do and let more of their people come to work in high productivity places?