On Journalism and Global Development--Nicholas Kristof 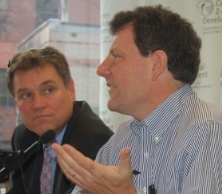 My guest on the Wonkcast this week is New York Times columnist and two-time Pulitzer Prize winner Nicholas Kristof. Nick’s incisive reporting on the lives of poor and vulnerable people—especially girls and women (see, for example, Half the Sky)—has led millions of his readers to empathize with people facing difficulties they could otherwise hardly imagine.

Since 2006 the NYT has run a “Win aTrip with Nick Kristof” contest, in which the lucky winner, often a new college graduate with no prior experience overseas, accompanies him to places like eastern Congo and Darfur. I think it’s a brilliant way to connect Americans with the reality of life in poor countries. I’m happy that since 2010 CGD has supported the contest by screening thousands of applicants, presenting Nick with a short list of finalists from which he picks the winner (see here, here and here).

With the backing of the New York Times, Nick has been remarkably successful in getting Americans to read and care about global poverty. But as a recovering foreign correspondent who did most of my reporting before the rise of the Internet, I worry that the media revolution—and the collapse of the old advertising-driven journalism business model—means that the today’s media consumers are even less well informed than a decade ago.

I asked Nick to join me on the Wonkcast discuss the current state and future prospects for international reporting, hoping he will reassure me.

“I am deeply concerned about the collapse in coverage of global news,” Nick tells me. “It’s particularly striking in the case of television but also in newspapers and news magazines. The [New York] Times is a bit of an exception because we see ourselves as having a comparative advantage of continuing to cover the world, as other people drop that coverage.”

“Your average news consumer is much less exposed to international stories, and those that they are exposed to are particular, segment stories: the selection of a new Pope, the crisis in the Korean peninsula. It tends not to be development stories and I think this is going to be a real blind spot in the US and also, to some degree, globally.”

“Can think tanks like CGD help to fill the gap?” I ask.

“I think that think tanks are filling some of the vacuum, whether it’s the Center for Global Development or the Human Rights Watch monitors. They are providing really serious, long-form [content], what we would think of as news coverage…The problem is that it’s not reaching the general public,” Nick says.

“If you were interested in what’s happening in Syria, you could find some amazing coverage from Human Rights Watch or Amnesty International but our average news consumer is not going to see that on the evening news or on the Today show.”

“But what about social media?” I ask.  Advocates for new media often argue that people have more access to news than ever before. News is shared on Facebook and on Twitter. People are inundated with information.

“Here’s how I see it,” Nick replies. “There is indeed much more news available because of the Internet. So if you are an interested news consumer you can find much more about the world than you ever could before. For those people, the Internet and social media are just fantastic. It used to be that if you were interested in, say, Kenya, then there really wasn’t going to be very much in the New York Times, the Washington Post, or the Wall Street Journal. These days you can read the Kenyan newspapers online. So in that sense, it’s just terrific.”

“But if you’re looking at lowest common denominator, I’d say that news consumption is shrinking. People aren’t getting much news from social media because they’re following Justin Bieber; they’re not following NPR.”

“And I think one of the basic problems is that news organizations used to feel like they filled a special role, that they had an obligation to provide spinach in their broadcasts, to tell people things that maybe they didn’t really care about,” Nick says. “These days, given the crisis in the financial model and journalism, news organizations are dropping the spinach and it’s all dessert.”

Some highpoints from the rest of the interview:

Nick suggests that the crisis in journalism is likely to get worse before it gets better. But ultimately he ends on a hopeful note: the old guard newspapers, new magazines, and television outlets, he says, will eventually find a better business model. “Content is important enough that we will find ways to pay for it,” he says.

My thanks to Catherine An for providing a draft of this blog post, and to Alex Gordon for editing the Wonkcast.