UK Prime Minister Boris Johnson’s recent reshuffle saw substantial changes to the Department for International Development’s (DFID) and Foreign and Commonwealth Office’s (FCO) ministerial teams, the most striking of which was that the two departments will share all of their junior ministers while each retaining cabinet-level secretaries of state. The move followed the UK’s exit from the EU on 31st January and came after months of speculation that DFID might be folded into the FCO. In this blog, we explore how the mix and portfolio of DFIDs junior ministers has changed over time, how the UK’s ministerial set-up compares with Germany and the US, and what this move might mean for both departments, and we identify opportunities and risks.

DFID and FCO move to a single team of junior ministers

The recent reshuffle left DFID and FCO with a joint junior ministerial team of seven, up from two in the prior year (Figure 1), with each gaining new junior ministerial posts (three and two, respectively). The government now has 13 joint ministers in total, 10 of which include at least one department handling large foreign-facing portfolios (diplomacy, development, trade and defence), and aligns with plans to “integrate” the UK’s foreign policies.

While this is not the first time DFID and FCO have had joint ministers, never before has its entire junior ministerial team been shared. DFID’s first joint ministerial post was created in 2015 to coordinate the resettlement of Syrian refugees across DFID, the Home Office, and the Department for Communities and Local Government. The post ended just nine months later, yet cross-appointments soon became a regular feature of DFID’s leadership—Theresa May’s government created two joint posts with the FCO in 2017. In 2019, a third joint minister was added, this time between DFID and the Department of Environment, Food and Rural Agriculture (DEFRA), with responsibility for Caribbean and Overseas Territories, and climate and environmental policy.

Relative to the rest of government, the use of joint ministers within DFID started quite late. The Institute for Government reports that joint ministerial posts emerged in the late 1990s with New Labour, increasing steadily over the 2000s to a peak of 16 joint posts by 2016. While the late arrival of joint ministers to DFID was perhaps by design—DFID was, after all, created in part to de-link development from strategic objectives—their continued use since 2017 follows plans to deepen cross-government collaboration for development as announced in the prevailing Aid Strategy. 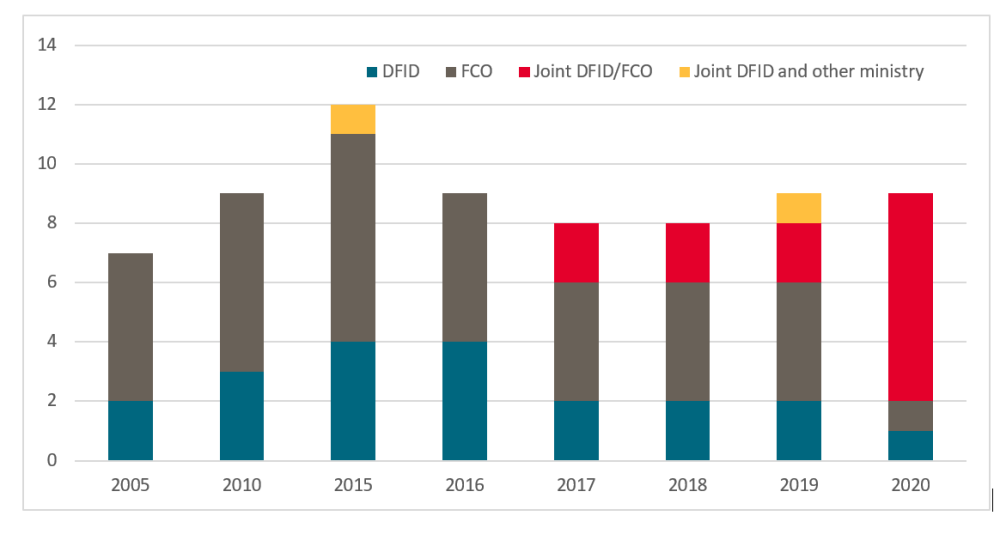 Source: Author’s analysis of “List of Ministerial Responsibilities” publications produced by the Cabinet Office, 2015-2019. Data for 2020 taken from DFID and FCO websites. Data for 2005 and 2010 sourced from annual DFID publications.

The combination of development and foreign policy thematic areas across portfolios—and the level at which portfolios are allocated—can signal changing priorities. From the development perspective, there are perhaps three changes worth noting.

Other key priorities of mutual interest to development and diplomacy, such as security, stabilization, and climate change, remained relatively consistent and continue to be held by ministers of state.

Joint ministers are uncommon across development and foreign ministries

For instance, Germany, which maintains a fully independent development ministry, keeps ministerial teams between development and the foreign office separate. At the top levels, this separation has been considered part of the “coalition arithmetic” of the German political model, where its development minister serves as a second “foreign” ministerial post, and is of considerable value in the government’s coalition-making and negotiation. (Some have suggested that this political calculus has also saved the development ministry from being absorbed by its foreign office). While the ministerial teams remain separate, efforts to deepen coordination across government has been pursued through other means, including the creation of a new inter-ministerial steering group to ensure coherence in implementing its Marshall Plan with Africa.

While other countries do have ministers that cover development and other portfolios (the Netherlands, for instance, has a Minister of Foreign Trade and Development Cooperation that serves as the deputy for the Minister of Foreign Affairs), these posts have tended to exist within foreign ministries with responsibility for development (i.e., the merged model of aid management), rather than across separate ministries.

Joint ministers for a Global Britain?

The recent reshuffle has not only left DFID with the largest ministerial team in its history, but has also signalled that Johnson sees joint ministers as the harbingers of a Global Britain.

As DFID and FCO new ministers settle into their roles, there remain important questions about how they will split their time across departments and prioritize potentially competing objectives. Yet the joint posts could also create new opportunities to improve the UK’s effectiveness by allowing FCO and DFID officials to explore complementarities, and deepen policy coherence for development. Understanding how foreign policy can support developmental outcomes will be important as the new team shapes the UK’s future approach to development in the integrated review—in particular, by ensuring that cross-government interventions work together to advance poverty reduction.