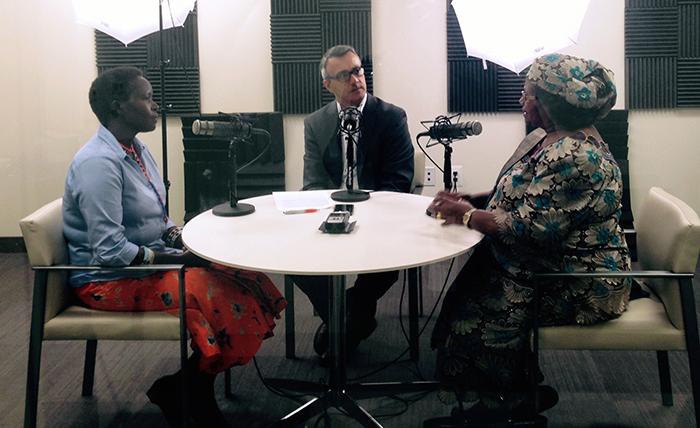 From left: Kakenya Ntaiya, Rajesh Mirchandani, and Joyce Banda on the CGD Podcast

“When I was five I found out that I had a husband.” That’s how Kakenya Ntaiya’s extraordinary story begins.

As a Maasai schoolgirl in rural Kenya, by the time she was thirteen, Ntaiya was expected, like all girls her age, to go through the ritual of female genital mutilation. As she recounts in this CGD Podcast, it was seen as a teenage rite of passage to be welcomed.

“Everybody’s excited about it . . . because it is what is going to make you a woman and it is going to give you status in the community. You’re going to be considered an adult,” she recalls.

Ntaiya could just as easily be a Malawian, says Joyce Banda, former president of Malawi and now a CGD distinguished visiting fellow, because experiences like hers are “across the board” in rural villages: "85 percent of Africans are rural-based. In most countries, 20-25 percent at the most are urban-based—those that can escape these experiences" (although FGM is not unheard of amongst urban communities).

President Banda’s forthcoming work at CGD will focus on solutions to ingrained cultural practices that take hold before a girl even reaches the age of ten, because, as she says, “by the time [a] girl child goes to school . . . it’s too late. This child has already been disadvantaged.”

The choice: FGM and marriage vs. education and shame

That dreadful deal allowed her to finish school; she went on to win a scholarship to study at a US university, completed her PhD, and now runs an international non-profit, the Kakenya Center for Excellence, a boarding school where parents agree to spare their enrolled daughters longstanding cultural practices such as FGM and early marriage.

"What do those practices do to a country?" I ask my podcast guests.

“It means that the country will never come out of poverty,” says Ntaiya, “because the idea is to keep the people in the rural [areas] the same.”

For President Banda, Africa’s second female president and previously Malawi’s Foreign Minister and Minister for Gender and Child Welfare, trying to tackle harmful traditional practices taught her that it’s not enough to pass a bill. Instead, you have to change people’s mindsets.

“I fought so hard to champion the passing of the domestic violence bill so the Malawian woman has a tool where she can even evict an abusive husband. But they would be beaten and they would swell up and they would pretend they were not beaten, because socially, culturally, there is so much pressure for you to stay in a marriage . . . so you’d rather be beaten, be abused, and not report.”

“Don’t tell the custodian of the culture to eradicate that culture.”

As evidence that cultural norms can be challenged, President Banda points to her work in office to reduce maternal deaths. By engaging traditional village hierarchies (male chiefs) to change ingrained practices and persuade or oblige rural women to go to health clinics to give birth, President Banda says Malawi recorded a decrease in maternal deaths of almost 30 percent.

Ntaiya agrees the same principle could apply to reducing FGM and early marriage.

“When we talk about women and girls’ empowerment,” she says, “and we come in with force and we want to put people in jail and we have this attitude of changing the world in one day . . . it doesn’t work. We have to respect the hierarchy within the community and work with it.”

“You don’t tell the person who is a custodian of the culture to eradicate the culture that they actually believe in. . . . The law without educating people actually doesn’t do anything.”

Apart from President Banda, other CGD experts are also looking into how to reduce harmful cultural practices. Senior fellow Charles Kenny investigates how far laws against FGM can actually move norms in a country in this paper examining evidence from Burkina Faso, while Matt Collin focuses on early marriage.

President Joyce Banda and Kakenya Ntaiya were speakers at the third annual DC Girl Summit, co-hosted by CGD, Girls Not Brides USA, the International Center for Research on Women, the International Womens’ Health Coalition, and the Population Council. You can watch video of the event here.

Listen to the full podcast at the top of this page.