How China, Italy, the UK, and US Can Drive G20 Fossil Fuel Subsidy Reform | Center for Global Development | Ideas to Action Skip to main content

How China, Italy, the UK, and US Can Drive G20 Fossil Fuel Subsidy Reform

US president-elect Joe Biden has pledged to eliminate fossil fuels, domestically and globally. This is a hugely important climate initiative and one that economists have been advocating for some time. The political barriers to such a move should not be underestimated. Still, with Italy and the UK chairing the Conference of the Parties (COP) to the UN climate change convention and the G7 and G20 collectively, this looks like an ideal moment to work towards an agreement that would achieve significant fiscal savings to support COVID recovery while taking a major step in tackling climate change, most notably through fossil fuel subsidy reform.

This blog looks at the fiscal cost of those subsidies, which countries make most use of them overall, and how dirty are the fuels they subsidise. We look at political barriers and conclude with four reasons why reform can succeed in 2021.

Fossil fuel subsidies are a negative carbon tax which encourage wasteful overuse just as carbon taxes incentivise the opposite. Where they are given to producers, they protect inefficiency in sunset industries which needs to phased out as a matter of urgency to avoid the escalating the climate emergency, and where they are directed to consumers to alleviate energy poverty, they tend to be poorly targeted, mainly benefitting wealthier households. Furthermore, as the energy transition looms, fuel subsidies in oil and gas rich countries reinforce production and consumption patterns which will amplify negative price shocks when demand and prices for fossil fuels fall during the energy transition. In addition, subsidies offer the countries that use them an artificial competitive advantage over those that don’t, incentivising others to adopt them in turn.

The scale of the problem

There are various methods for calculating subsidies, but here we simply sum cash transfers from governments to firms and households or tax deductions for consumption or production of fossil fuels, including electricity generation, using OECD data. By this calculation, global subsidies in 2019 had a nominal value of around $173bn. To put this figure in context, it is of similar magnitude to global aid from OECD DAC members, which in 2019 totalled $153bn, and is both significantly larger than the Paris Agreement on climate change goal of $100bn of climate finance to assist developing countries with climate mitigation and adaptation, and has climate effects that are the direct opposite of the Paris goals. 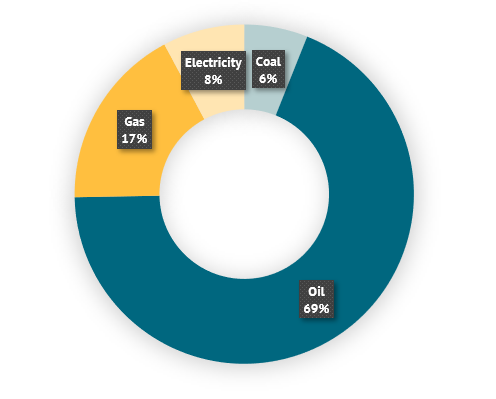 The elimination of such huge subsidies would free up government funds for domestic spending—they account for some 0.2 percent of global GNI. Note that this pertains just to cash transfers and tax deductions; if we looked at the full social costs of carbon, then fossil fuels are massively under-taxed— the IMF estimate the “subsidy” relative to the true costs to be $5.2 trillion in 2017, or 6.5 percent of global GDP.

Which countries subsidise the most?

President-Elect Biden has stated he will engage key leaders to phase out fossil fuel subsidies. Here we look at which countries should be priorities, both in terms of those with the highest absolute and relative subsidy levels, and those whose fuel subsidies are the most damaging. The table below shows the largest subsidisers in international dollar value terms and translates this figure to per capita terms.

Subsidies are also scaled to how damaging they are in terms of carbon emissions relative to natural gas, the least polluting of the fossil fuels. To illustrate, treating natural gas as a numeraire: it emits around 424 grams of CO2 per Kilowatt hour when burned for fuel while coal emits 912 grams per Kwh, so coal has (912/424) = 2.15 the carbon factor of gas, and thus the value of a country’s coal subsidies is multiplied by 2.15. Oil has 1.8x the carbon factor of gas, and electricity’s carbon factor varies by country, depending on the mix of fuels used to produce it. Note that natural gas is not a clean fuel or an alternative to renewables. It still emits carbon, but our methodology requires a numeraire, so we chose gas.

Table 1. Fossil fuel subsidies, per head and scaled according to carbon intensity of energy 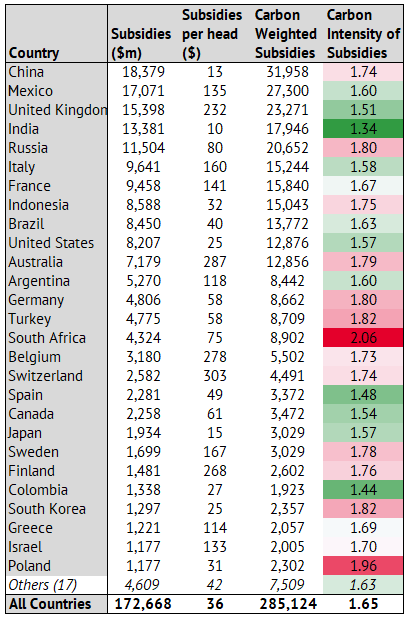 G20 countries occupy the top 15 spots, and the G20 collectively accounts for 88 percent of subsidies, suggesting that forum will be important for promoting reforms. The US falls just outside the top 10, with $8.2bn in subsidies, which, for the 44 countries for which we have data, still makes it a substantial subsidiser in absolute terms.

Unsurprisingly, the two countries with the largest populations, India and China, are in the top five. The majority of fuel subsidies (72 percent) go to consumers, so larger populations should be associated with higher population needs for energy subsidies. But these two countries give relatively modest subsidies when scaled to population—around half of what a US citizen received and close to 1/20th of a UK citizen’s average subsidy. The notable difference between them is the carbon intensity of their subsidies. The majority (58 percent) of India’s subsidies go to natural gas whereas the vast majority (89 percent) of China’s support oil.

Four of the top 10 subsidisers are high-income countries: the UK, Italy, France, and the US; and OECD countries are responsible for 60 percent of the total subsidies in these data and the large subsidies- per-head figures in the table are mostly seen in richer countries.

Fuel subsidies are politically difficult to remove in many countries. Where poverty is widespread, subsidies are important to alleviating energy poverty. They are an easily administered redistribution mechanism that citizens perhaps trust more than measures which are better targeted at reducing poverty but may have complex eligibility criteria and be viewed as open to corruption.

Fuel subsidies not only provide fuel for households, but inputs to production. India, for example, has a long history of subsidising energy to agriculture, which it justifies on the grounds of food security while subsidies to producers are seen to protect jobs and reforms can be portrayed as a threat to livelihoods. Recent controversies in the US around Biden’s proposed domestic reforms hint at the challenges ahead. Elsewhere, fuel subsidy reform has even led to street protests or riots, including ones in Indonesia in 1998 which ultimately brought down the government.

Perhaps this is why, since the G20, over 10 years ago, committed to “rationalize and phase out over the medium term inefficient fossil fuel subsidies that encourage wasteful consumption” little progress has been made. Subsidies are just 9 percent lower now than during 2014-16. Among the largest subsidisers, India is to undertake a peer review with France. China has made some reforms to petroleum prices and plans to reduce coal consumption. Mexico identified 10 subsidies to remove worth $2bn and has so far eliminated two of these. Indonesia achieved some reform in 2014-17, but some have since crept back.

A very rough measure of how difficult it might be to remove subsidies can be seen by scaling them to a country’s income. In figure 2, we see the 15 countries with the largest subsidies relative to their economies—perhaps suggesting countries where subsidies are seen as most important to energy security, jobs, and incomes—and thus how politically difficult they are to remove. In figure 3, the 15 smallest subsidisers relative to GNI are also shown. 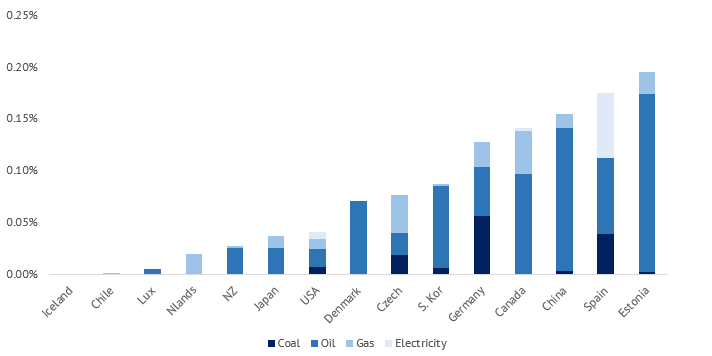 A timely moment for reform

There are four reasons to believe that fossil fuel subsidy reform could be possible at this moment in time:

First, it’s notable that both China and the US feature in the list of the lowest subsidisers relative to economy size. In terms of political commitment, President Xi Jingping newly committed China to net zero by 2060 at the UN General Assembly in September. With Biden committing to “demand a worldwide ban on fossil fuel subsidies” and planning a trillion dollar climate program at home, there could be an opportunity for progress.

Second, although oil prices have recovered somewhat from their dramatic lows earlier in 2020, they are still low by historic standards partly as a consequence of the COVID-19 pandemic reducing aggregate demand globally. This presents an opportunity for governments to reduce fuel subsidies with lower increases in energy poverty than would occur when prices are higher.

Third, as countries emerge from COVID facing stronger fiscal pressures than before, there may be an opportunity for an external initiative which can help policymakers to sidestep domestic criticism and make the case that there are competitive reasons to remove subsidies.

Finally, Italy and the UK—both in the top 10 for subsidies—are co-chairs of this year’s climate COP and will respectively chair the G20 and G7. They are in a position to lead by example.

Subsidies give unfair advantages to recipients, so removing them is a coordination challenge which is difficult to achieve through markets. This is when multilateralism works best and why president-elect Joe Biden’s team should push for concerted diplomatic efforts to champion this issue and achieve broad global uptake of this goal. Subsidy discipline has been identified as a priority for the World Trade Organization, and with Italy chairing the G20 concerned with economic recovery, as well as chairing the COP, this could a key moment to make progress.