A Global Burden of Disease Data Plus Model to Inform Domestic Decision-Making: In Search of Super-local Data | Center for Global Development | Ideas to Action Skip to main content

A Global Burden of Disease Data Plus Model to Inform Domestic Decision-Making: In Search of Super-local Data

Global Burden of Disease (GBD) country rankings can strengthen the case of advocates at global and national levels for prioritising investment towards the major drivers of mortality and morbidity. But as discussed in our earlier blog post, when it comes to informing specific investment cases within these broader priorities, GBD data alone are not enough to allow consideration of trade-offs and of opportunity costs of alternative investment choices addressing the same problem. Further, the way the data are generated and presented makes it hard to get national researcher and policy maker buy-in (despite a broad engagement at country level and the introduction of “national GBDs”) as ownership remains with a Western centre of excellence (it is important to ensure coherence, standardisation and good quality, but not necessarily consistent with the whole idea of country ownership and local capacity strengthening).

The next step in using data to trigger action ought to be the generation, in conjunction with domestic stakeholders, of what we call below “super-local data.” For example, data that are granular enough to inform and defend usually very political local resource allocation decisions (and whose generation is in fact driven by those decision makers’ very political questions).

SDG data can make a strong case for addressing through reallocation and targeted interventions the geographical mismatch between need and resources (e.g. see here for an exposition of that mismatch when it comes to malaria in Nigeria) as long as the endogeneity between funding flows and outcomes over time can be controlled for.

However, for any analyses seeking to attribute causality between investment (quantity and quality) and achievement, as the GBD authors are promising, one may need much more granular “super-local” data, of the kind currently not included and hard to include in GBD, on things such as spending on interventions (which, by the way, can include population level public health programmes as well as individual pharmaceutical or diagnostic technologies) and their costs and benefits compared to the next best alternative for that specific setting. Further, only such “super-local” data could underpin a convincing case made to local payers and Treasuries for investment (or co-financing) using domestic resources, in effective interventions. And an accumulating body of such incremental decisions about, say, additions to the benefits’ package or to the medicines’ list, reimbursement rates and managed entry agreements, investing in primary care clinics for certain types of service provision or phased expansion of coverage to certain population groups, could then help tell a convincing story to domestic players about how GBD-informed targeting of investment can help drive better outcomes on the ground.

Super-local data include but are not limited to:

A standardised Reference Case for economic analysis, widely used by high income countries’ payers when they make decisions on investing in services and technologies, includes most of the elements above and can serve as a useful reminder of methods and data gaps that must be filled if countries are to make their own informed decisions on spending for reaching UHC and meeting the SDGs.

The burden of collecting super-local data should not be placed squarely on the shoulders of the GBD team. As the researchers point out in their conclusion, “…GBD is not, and should not be, a replacement for investing in high-quality, routine health information systems that are crucial for measuring and evaluating SDG progress at national and subnational levels.” Other initiatives such as the recently launched Global Partnership for Sustainable Development Data or Paris21, may be better suited data collection and validation conduits. Perhaps a first step towards better quality relevant data would be committing some resources to implementing with select countries a Data Compact, a performance-based agreement between national and subnational governments, funders, technical agencies, private players and other stakeholders to reward country governments for progress made in producing and publishing better (more timely, more open, more accurate, more complete) data in one or two key areas. With better denominator data, and a stronger culture of good quality verifiable, openly available data, further progress towards sourcing and using more granular information such as costing data, could be achieved.

Such granular super-local data coupled with the technical and process support needed to bridge “the priorities ditch” for national authorities to apply them to difficult decisions locally, may change the nature of the discussion between Ministries of Health and National Health Insurance Funds on one hand, and National Treasuries, on the other. High profile calls to action and global cases of the billions of USD and millions of lives to be saved, made in prominent public health journals and conferences, may be less powerful unless there is evidence that national and subnational Ministries of Health: 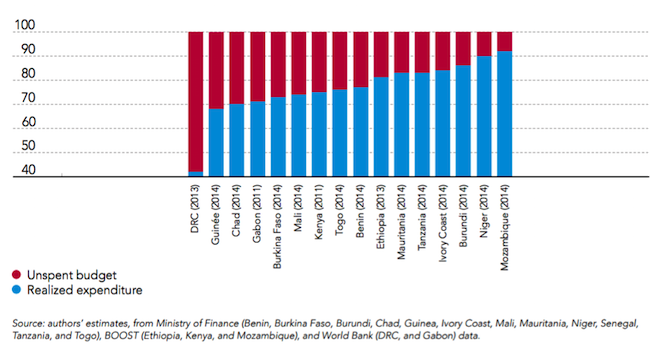 In light of most countries transitioning away from aid dependence, monitoring progress towards the SDGs becomes all about holding the right people accountable and, at the same time, empowering the right people to act. The global perspective, whilst valuable, is perhaps no longer sufficient to trigger action at the local level.