Manchester United footballer Marcus Rashford’s campaign to get the UK government to feed disadvantaged children during the school holidays has probably won him more fans than his quick ball skills ever will. It is a masterclass in campaigning: a single, achievable policy issue, phenomenal use of his platform, backed with good data and an increasingly strong coalition of partners.

And it’s an issue that is winning him hearts and minds. Kids going hungry in the UK is a national shame, and there are few (with some notable exceptions) who believe it to be acceptable. On Friday, swathes of local councils and local businesses took to social media to support Rashford’s campaign, committing to feed hungry kids during the school holiday. Rashford is fast creating a movement to abolish child hunger in the UK.

Rashford is campaigning in the UK. But child hunger—particularly during the COVID-19 pandemic—is a global problem. Worldwide, hundreds of millions of kids get meals at school and, for many, this is the only hot, nutritious meal they have all day. With schools still closed nationwide in more than 130 countries—including much of sub-Saharan Africa and South Asia, where child malnutrition is highest—the World Food Programme estimates that more than 300 million children are not receiving their school meal.

Back in March we wrote about the impact that school closures were having on school feeding and suggested some alternative delivery mechanisms that were getting underway. While many countries have now implemented cash or kind social assistance programs (see Figure 1), the World Food Programme predicts devastating levels of hunger in the coming months as the impact of the pandemic takes hold and the UN Food and Agricutlure Organization predicts that the pandemic may add between 83 and 132 million people to the total number of undernourished in the world this year. 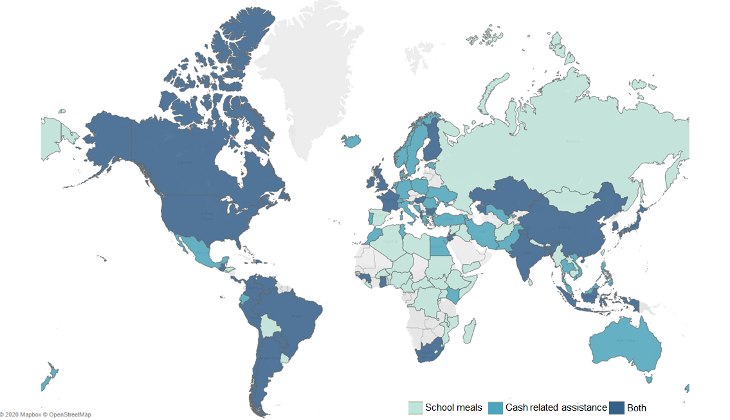 Rashford isn’t the only footballer who’s concerned about children going hungry. His Manchester United teammate Eric Bailly has his own foundation that provides food and basic support to communities in his native Côte d’Ivoire, where just 12 percent of school children are fed at school, according to a 2019 survey. Liverpool forward Sadio Mane provides considerable support to disadvantaged families in Senegal, where 17 percent of children under 5 are chronically malnourished. And Manchester United’s David De Gea made large donations to relieve the impact of the COVID-19 pandemic in Spain.

But Rashford has demonstrated that influencing policy can be far more powerful than donations alone.

Footballers from 111 countries currently play in the Premier League. Many of them already make tremendous charitable efforts and many—like Rashford—have a sizable platform from which they can wield influence. Eric Bailly has more twitter followers than Côte d’Ivoire President Alassane Ouattara and opposition leader Guillaume K. Soro. Similarly, Manchester United midfielder Nemanja Matic, who has built a playground and football pitch for the school he attended in his native Serbia, has a bigger social media following than Serbian President Aleksandar Vučić. The high-profile footballers have millions of social media followers, topped by Juventus’ Cristiano Ronaldo, who has more Twitter followers than President Trump.

World Cup 2018: The World’s Biggest Open Audition
With Schools Closed, Hundreds of Millions of Children Are Not Receiving School Meals

If they were to follow Marcus Rashford’s lead, the impact these players could achieve could be incredible. Rashford’s fundraising efforts have raised thousands for charities, but his campaigning has leveraged millions in government spending. Earlier this year he led a fundraising campaign that raised £180,000. Just weeks later, he had convinced the UK government to perform a screeching U-turn and add £120 million. He’s not the only athlete to take on pressing social issues at policy level. US (gridiron) football player Colin Kaepernick’s charity has commendably donated over $1 million for COVID relief, but that probably doesn’t come close to the impact that his campaign against police brutality has had on the world.

The beautiful game could change the world

Football, and the Premier League in particular, has incredible global reach. Their own estimates suggest more than 3 billion people watched games during the 2018-19 season. And footballers themselves have platforms that enable them to reach further and deeper than many politicians or other campaigners can.

In the last six months Rashford has successfully mobilised the British public to care deeply about child hunger. His campaign has shown that—with the right issue at the right time—footballers can influence policy and influence the public to get behind social welfare goals. As football fans (not, we hasten to add, of Manchester United) we hope Rashford’s fellow players will learn from him and use their platform to tackle pressing social issues as effectively as he has.

Thanks to Ana Minardi for research assistance and to the CGD football group for helpful suggestions.