Five Reasons to Be Optimistic About the Future of Forests

This blog originally appeared on the World Economic Forum’s Agenda blog and on the Tropical Forest Alliance 2020 website.

In 2016, outcomes from last year's climate summit in Paris provide reasons to hope that we can save the world’s remaining tropical forests before it’s too late.

Here are the top five reasons why:

If deforestation were a country, it would rank as the third-highest source of greenhouse gas emissions, greater than those of the European Union. And if deforestation were halted and damaged forests allowed to grow back, the combination of avoided emissions and additional carbon storage in forest vegetation would be equivalent to up to one third of current global emissions from all sources.

Over the last decade, climate negotiators have painstakingly negotiated an approach to reducing emissions from deforestation and forest degradation (so-called “REDD+”) in which rich countries provide financial reward to developing countries for conserving their forests on a pay-for-performance basis. The Paris agreement explicitly endorses this approach.

More than 50 developing countries have started putting into place the policies, strategies, and monitoring systems necessary to demonstrate progress and qualify for financial support. Unfortunately, the levels of finance pledged from donor countries have been far from sufficient to tip the balance against the strong forces driving business-as-usual deforestation. Moreover, as shown in the figure below, the majority of funds pledged prior to Paris have been programmed as traditional aid rather than as performance-based reward. 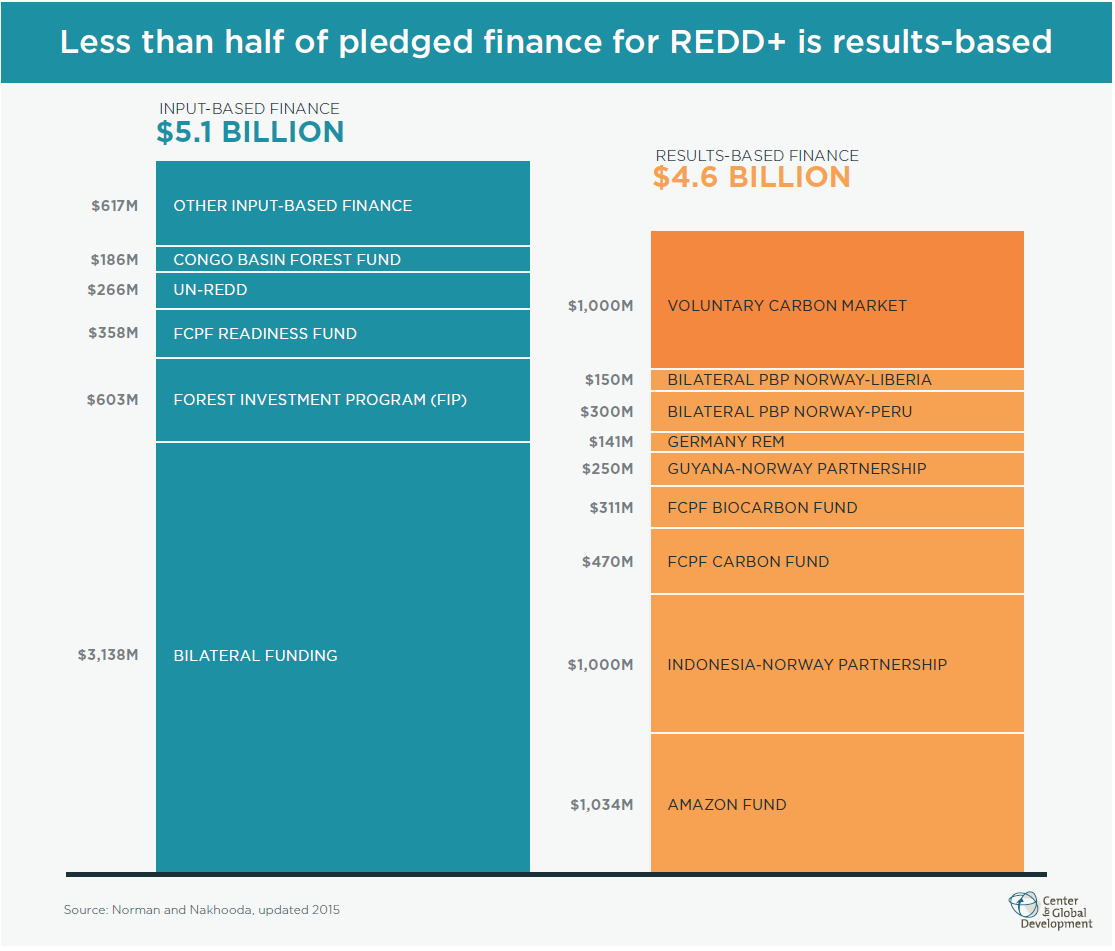 Thus, the pledge of an additional $5 billion of mostly performance-based finance by the governments of Germany, Norway and the United Kingdom (the “GNU” countries) on the first day of the Paris negotiations will provide an important a lifeline to forest protection efforts in selected developing countries. While funding is still not sufficient, perhaps the combination of the GNU pledge and the explicit text on REDD+ in the agreement will shame other rich countries to step up their financial support.

The agreement’s 1.5-degree aspirational target and goal to balance emissions with removals will draw more attention to forests.

Most observers were surprised that negotiators in Paris upped aspirations to limit global temperature increase to 1.5 degrees Celsius. Further, they agreed to achieve a balance between greenhouse gas emissions and removals in the second half of this century. While appropriately exerting downward pressure on fossil fuel emissions, these goals will also focus more attention on forests a technology to remove carbon from the atmosphere: a safe and natural carbon capture and storage (CCS) system.

When fossil fuels are burned, there are only three places carbon emissions can go: into the atmosphere (causing climate change), into the oceans (causing acidification detrimental to marine life), or into the biomass of growing vegetation on land. Trees capture carbon from the air and store it in leaves, branches, trunks, roots and soil. If we’re serious about achieving the more ambitious goals contained in the Paris agreement, we’d be crazy to continue to destroy the only CCS technology we already have: forests.

Non-state actors are stepping up to play their roles in protecting forests, especially at jurisdictional scales.

Private sector companies are responsible for vast areas of forests under concession agreements. Sub-national political jurisdictions – states, provinces, and districts – often have authority for land-use planning and issuing permits for forest use. And indigenous peoples manage more than 20 percent of the world’s forest carbon in their customary territories (more on indigenous peoples below).

In Paris, these forest stewards were out in force. The Lima-Paris Action Agenda(LPAA) was an official series of events designed to highlight the commitments of non-state actors to collaborate in implementing a negotiated agreement. Private companies that have taken on “no deforestation” supply chain commitments were well represented, and several used the occasion to announce new pledges.

Unilever and Marks & Spencer, currently co-chairs of the Consumer Goods Forum, a grouping of consumer-facing manufacturers and retailers, announced a commitment to preferential sourcing of commodities to reward countries and subnational jurisdictions making progress to reduce deforestation. Such market-based rewards would complement the financial incentives sought by the governors of states and provinces that participate in the Governors Climate and Forests Task Force, who have pledged to reduce deforestation, and who were well-represented on numerous panels at side events in Paris.

Indigenous peoples were disappointed that recognition of their rights was relegated to the non-binding preamble of the Paris agreement, but they were successful in using the Paris process to claim a place at any table where climate and forests are discussed. The evidence is clear that the presence of indigenous peoples correlates with less deforestation – in some instances, the boundaries of indigenous territories can even be seen from space.

Indigenous peoples were visible at the Paris conference venue and indeed across the city, where their “Paddle to Paris” campaign, culminating in a float down the Seine, caused a social media sensation. At the LPAA Focus on Forests event, HRH The Prince of Wales highlighted how indigenous peoples should guide forest protection efforts, and indigenous leaders from three continents articulated their roles in policy circles and on the ground. And at UNDP’s Equator Prize awards ceremony (video available here), indigenous communities from Bolivia, the Democratic Republic of Congo, and Indonesia were among those honored for their efforts on the front lines of forest protection.

Periodic review and revision of national pledges will empower advocates for forest protection.

The Paris agreement requires that the Intended Nationally Determined Contributions (INDCs) to reducing global emissions submitted by individual governments be evaluated and re-submitted every five years. These procedures will enable domestic constituencies in both rich and poor countries to pressure their governments to implement the pledges they’ve already made, and to ratchet up their pledges over time.

In forest-rich countries, these reviews will be important opportunities for beneficiaries of the “non-carbon benefits” of forest protection to advance their interests. Now mostly latent, these constituencies include:

In rich countries, the periodic renewals of pledges will provide openings to promote “joint implementation” – also explicitly encouraged by the Paris agreement – through which countries can work together to increase overall ambition – including through REDD+.

While there’s much work ahead to translate the pledges in Paris into progress on the ground, these five outcomes provide reasons for optimism that forests will finally take their rightful place in the forefront of the battle to fight climate change.