Financing Development: A “Common but Differentiated” Path to 0.7%

Ministers are gathering at the UN this week to discuss the financing needs to meet the Global Goals—with the challenge that resources will clearly fall short, not least because most high-income countries are still failing to meet their financial commitments. We reviewed the pathways taken by the countries that agreed to the UN 0.7 percent target on overseas development assistance as a share of national income, and find that—perhaps unsurprisingly—aid as a share of the economy rises with per capita income.

This “pathway” could form the basis of “common but differentiated responsibilities” for emerging economies who don’t fall under the UN target but who are reaching income-levels consistent with providing aid. If high-income countries were also willing to increase their actual contribution, this pathway could even be the basis of a new deal to increase overall international finances, and deliver the extra $100 billion of aid per year that estimates suggest would be necessary to eradicate extreme poverty.

Looking back to look ahead: Pathways to reaching 0.7

In principle, the UN’s 49-year-old target for aid to be 0.7 percent of national income applies to “developed countries” (though Switzerland and the United States have not adopted it). However, in practice, we’ll see that few actually meet it, and those that do so tend to have income well-above the “high-income” threshold.

In 2015, the world agreed to a set of global goals with a target date of 2030—but there’s a widely recognised shortfall in the overall financing. New estimates by colleagues at the Overseas Development Institute suggest that, after increased growth and tax revenues, even just ending extreme poverty (goal 1) will require just under $100 billion per year of additional aid (alongside a reallocation).

If developed countries met the 0.7 percent target, (currently, the average contribution is 0.31 percent), it would more than double the $153 billion currently provided as Official Development Assistance (ODA). But whilst some like France and Germany are stepping up their contribution, others like the United States are stepping back, leaving the overall resources essentially flat in recent years, and falling for the least developed countries.

Looking at the seven countries that met the 0.7 percent target in 2017, the chart below plots their historic levels of aid as a proportion of Gross National Income (GNI) against their income per head (GNI per capita), going back to 1990. Across the group, it’s clear that commitments are higher where income levels are higher. 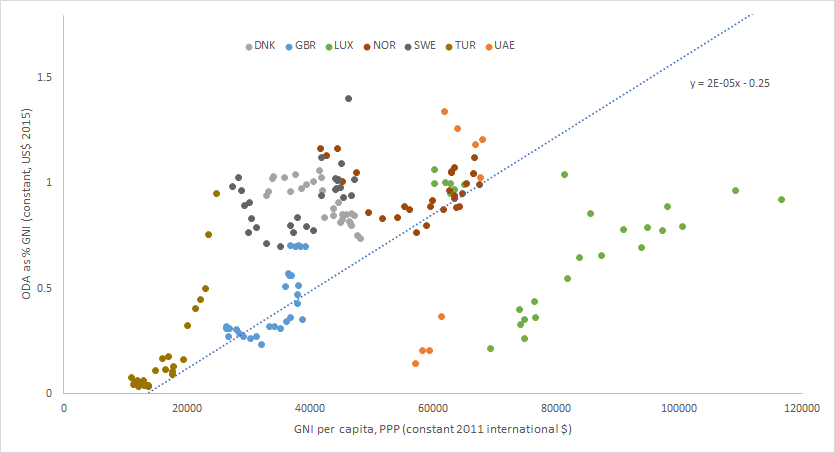 The line of best fit here (again, just for those that hit the target in 2017) suggests that these countries tend to do so with income per head around $47,500. The line also implies that assistance is at 0.1 percent at perhaps $17,500.

If we broaden this to look at a wider group of high-income countries that report to the OECD Development Assistance Committee (DAC) we see that a relationship still exists between income per head, and the share of national income provided as ODA. 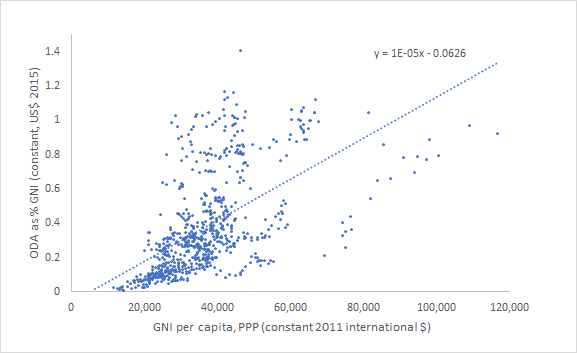 The dotted line of best fit (linear) suggests that countries historic behaviour implies they tend to contribute 0.7 percent when income per capita is $76,000, and that they contributed 0.1 percent at around $16,000 (an exponential line of best fit, not shown, gives lower income per head figures for both thresholds).

The latest extreme poverty rate in upper-middle-income countries is 1.7 percent, similar to that in high-income countries in 1970. Income per head—after adjusting for prices—is also similar (for example, using data from the Maddison project).

Current income per capita levels were $15,820 for Brazil; $18,140 for China, and $26,470 for Russia (2018 data). These countries already provide development assistance (notably China) and they clearly recognise the importance of their role internationally, not least in forming the G20, “a forum for major developed and emerging market economies.”

In sum, if emerging economies contributed development assistance in line with the historical pattern of higher income economies, this would be a substantial new resource to move the world towards the Sustainable Development Goals. If upper-middle income countries provided 0.15 percent (in line with historic contributions for countries with their average per capita income of $18,745), this would equate to $36 billion, much of it new. If high-income countries also lifted their average contribution a similar amount—from 0.31 percent to, say, 0.45 percent—this would add $75 billion, or up to $111 billion in total – and be broadly in line with the estimate of ending extreme poverty above.

The above pathway treats all economies equally—and makes no adjustment to expectations for issues like a country’s environmental or imperial past. Many (but not all) high-income countries clearly bear more responsibility for these and other issues. Similarly, development finance is just one issue—and this analysis does not consider contributions on other important global issues like security, the environment, or trade (we encourage you to check out our annual Commitment to Development Index for a broader picture).

Still, this historic data is one basis for “common but differentiated responsibilities” in relation to what countries contribute in international development finance. If the middle-income countries (especially the larger ones) were willing to follow this pathway, high-income countries should also be willing to step up their assistance—to form a potential “new deal.” A new paper by Glennie, Gulrajani, Sumner and Wickstead makes one such proposal—over a longer time-frame—for a fundamental rethink and a “Universal Development Commitment.”

The financing gap for resolving extreme poverty is real, and countries need to find a way to step-up their commitments. If countries at the UN recognise that development commitments should rise with income, it could lead to a remarkable step-up in resources—and may even be enough to to deliver on the SDGs.

We’re grateful for advice on our analysis from Andy Sumner, and for comments from Amanda Glassman and Masood Ahmed. All views and any errors remain our own.

Blog Post
Getting the Best We Can Buy: Three Solutions to Improve...
Tom Drake et al.