“Change blindness” is a phenomenon well documented by psychologists and brain scientists.  Due to some very deep, hard wired, features about how our vision works we often fail to see even large changes. See how many viewings it takes before you to see the change in this video of a merry-go-round (you’ll need to click on ‘change blindness demos’ and open the .avi file).

The source of change blindness (including in the merry-go-round video) is that the change often happens slowly and in the background.  Our neural apparatus for vision is deeply hard-wired to see changes that happen fast and to the foreground (what we are focusing on). So too is our political apparatus.

Europe is experiencing not one, but three population related crises.  Two are fast and one is slow.

Europe’s “refugee crisis” and, in the aftermath of the tragic events in Paris, the “terrorism crisis” are fast moving and in the foreground and hence getting lots of attention.  However Europe’s slow moving and inexorable ageing crisis is not getting attention.  All three are related, as Europe actually needs millions of migrants a year to mitigate its ageing crisis (a fact documented below).  As Jack Goldstone puts it, Europe thinks it has an immigration problem but what it really has is an integration problem.

The short-run refugee crisis is the result of tragic, unmitigated disaster for Syria, but actually could be a boon to Europe if leaders and populations come to grips with the long-run ageing crisis.  Europe needs to either find a way to accept massive flows of migrants in ways that are socially, politically and culturally acceptable or resign itself to chronic fiscal and economic weakness and falling living standards.

That won’t be easy, but if Europe is not going to take these migrants now, then when?  If not these people, who?

Europe is ageing out.

The labor force decline—which is the result of voluntary choices about reproduction—is not, in and of itself, a crisis.  There is not a population crisis but an ageing crisis: while the labor force aged population shrinks by 62 million, the population of Europe aged 65 and above rises by 45 million.  Never has the combination of fertility changes and improvements in longevity produced such dramatic inversions of the demographic pyramid so that the aged so dramatically exceed the young.  For example, in Italy today there are 5.7 million young people (aged 15-24) and about 6.8 million over 75.  By 2050 the forecast is 4.4 million youth and 12.6 million over 75—that is 2.8 people older than 75 for every one youth.

While the issues of ageing get really complex with tax rates, replacement ratios, retirement ages, health care costs, labor force participation rates of men and women and more in the mix, the initial arithmetic is pretty simple.  The current ratio of labor force aged to retirement aged (LF/R) is 3.3 to 1—there are only 3.3 work aged people (not all of whom are in the labor force) to sustain the pensions, health insurance, and elder care of every single retiree.  Even at that ratio the combined social protection programs that Europe is justly famous for—generous pensions, universal health care—require very high tax rates on workers to sustain.

Europe is going to be 212 million people short.

In the UN “zero migration” scenario, the LF/R ratio falls to 1.7 (shown below).  It is hard to imagine sustaining anything like Europe’s current social programs with that ratio of potential workers to retirees.

But there aren’t going to be 150 million more workforce aged people, there are going to be 62 million fewer, a gap of 212 million people.  The projected labor force aged population in 2050 is 227 million, but would have to be 439 million to sustain the projected 132 million Europeans over 65 at the current ratios.

As recently as 1980, when European social programs were reaching their current structure, the European ratio was 5.3.  At 3.3, the LF/R ratio is already far lower than had ever been observed in the world before these recent declines in Europe and Japan.  Outside of Europe and Japan, the lowest current ratio is Canada’s at 4.21.  It is not even clear that a ratio as low as 3.3 is “sustainable,” as countries have only reached these levels very recently.  So perhaps something like current social protection schemes might be possible at ratios lower than 3.3, but that is not obviously so. The lowest in Europe today is Italy at 2.85, with Greece close behind (not exactly inspiring confidence that these are fiscally sustainable. Meanwhile, Japan, hardly a model of recent economic success or coping with ageing, fell from 3.3 just ten years ago to 2.3 today, so this has not been sustained and hence cannot be taken as “sustainable”). 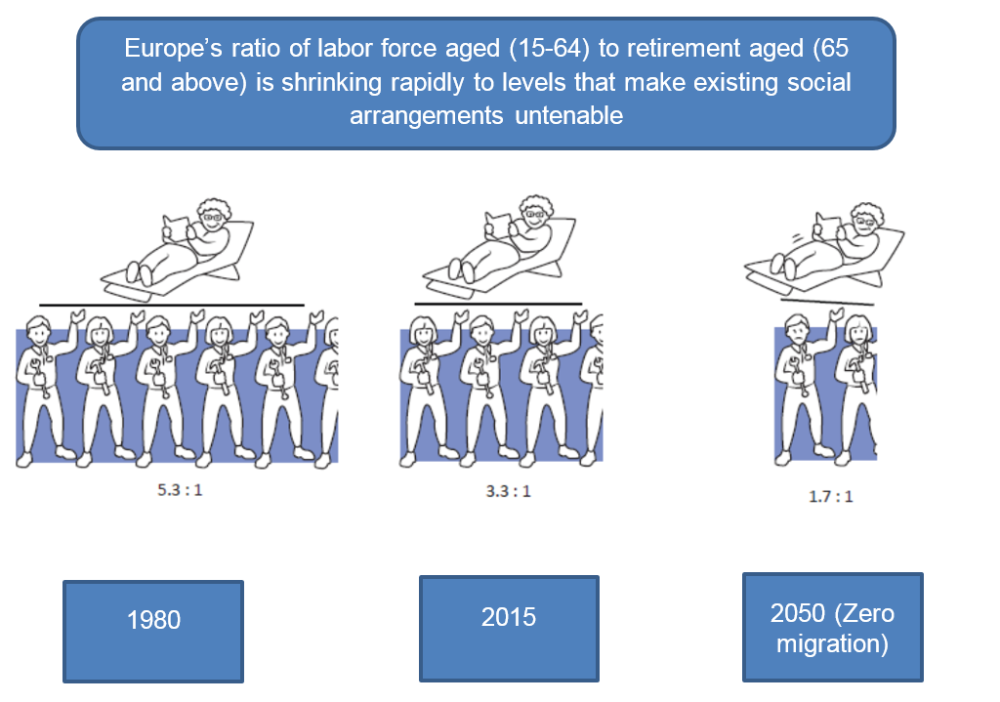 Some simple hypothetical calculations (not “predictions” or “forecasts”) illustrate the magnitude of the next increase in the labor force aged population from migration to maintain LF/R ratios.  To keep ratios constant (at their current historic lows) would require 6 million additional labor force aged population a year.  Even if one assumes Japan’s current LF/R ratio of 2.3, roughly the lowest ever observed in modern human history, could sustain anything like Europe’s current social programs, Europe would still need 2.2 million more labor force aged people per year.

‘Fear itself is politically fearsome.’

The UNHCR estimated that 800,000 potential refugees would reach Europe via the Mediterranean in 2015 and 2016.  That this comes in a huge spurt driven by conflict has made the “refugee crisis” massively visible and led to widespread discussions of how to “solve” it.  On top of this is the added challenge of addressing the crisis with the rising fear in Europe and the USA that the refugee and security challenges are linked.  And, whether these fears are rationally grounded or not, fear itself is politically fearsome.

It is worth keeping in mind that 800,000 a year is less than a fifth of the total that would be needed not to solve, but just to mitigate the ageing crisis. The question for Europe is how to accommodate the flows it needs while maintaining the other conditions it wants as well.

Like all of us, Europeans want lots of different things.  They want people to be able to decide how many children to have, they want to retire at a reasonable age, they want quality health care, they want to have something left over after their tax bill and they want to preserve their national and sub-national identities and cultures.  But, as the LSE trained Mick Jagger put it: “You can’t always get what you want.”  European democracies want freedom of child bearing and fertility, generous social protection, reasonable taxes and low rates of migration.  But even in a democracy, you cannot vote yourself a cake and vote you get to eat it, too.

The ageing problem is so severe it will take a little bit of everything: people will be encouraged to have more children with fiscal and non-fiscal inducements, retirement will be postponed (“live longer, work longer”), benefits will get squeezed, taxes will go up—and after all that Europe will likely still need substantial flows of migrants to maintain its citizens’ way of life. To paraphrase Mick Jagger again, let’s hope Europe gets what it needs.

So, while the refugee crisis is sudden, it is, like many crises, also an opportunity in disguise.  If Europe doesn’t want to accept people now, then when?  If not these people, then who?  If not as refugees, then how?  Now is the time for Europe to learn to let their people come not just because it is the right thing to do, but because they need them.  Whether or not Europe can recognize and solve its integration crisis is crucial to solving both the fast-moving and attention-getting short run challenges of refugees and security but also the longer run, much bigger, ageing crisis.