Health aid pays for life-saving medicines, products, and services in the poorest countries in the world. Funding for such uses needs to be smooth and uninterrupted. But when fraud is detected, funds are subject to sudden stops and starts—the result of a sequence of events set off by the scandal cycle in health aid. We examine this idea in a new CGD policy paper. 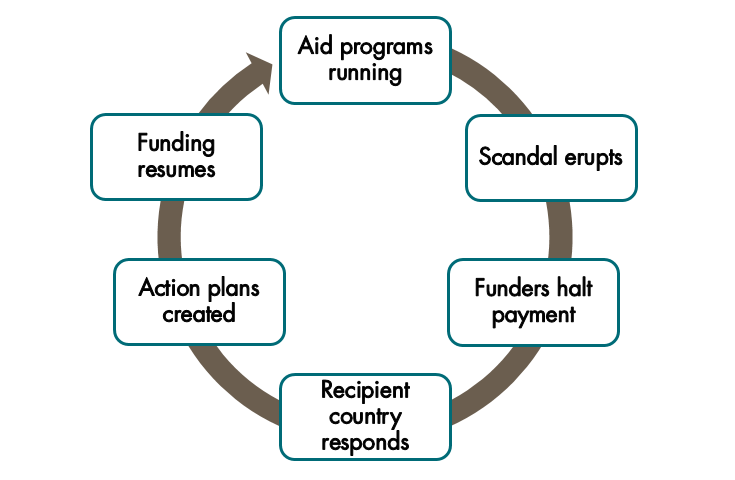 To understand the scandal cycle, we looked at four cases of fraud and response involving the World Bank in India, USAID in Afghanistan, the Global Fund in Mali, Djibouti and Mauritania, and European donors in Zambia. While corruption is discovered in different ways, scandals tend to erupt when the press publicizes it or a funder reacts strongly. Once allegations are in the public eye, funders typically react by suspending aid. Then, they work with recipients to create action plans for improving financial management systems, and eventually resume funding.

This scandal cycle is, unfortunately, all too common. In May, the Global Fund published an investigation that tracked down $3.8 million in fraudulent expenditures at Nigeria’s Department of Health Planning, Research & Statistics. The Fund’s executive director issued a statement reaffirming the Fund’s “zero tolerance of corruption” policy, underscoring that the Fund has frozen disbursements to several Nigerian agencies, and calling for reforms to government control measures.

As with the cases we analyzed in our paper, the focus on fraud often comes at the expense of considering the scale of corruption and the impact of disruption on health programs. While $3.8 million is no small number, it represents less than one percent of the $889 million in grants to Nigeria that the Global Fund audited in a companion report. Furthermore, the impact of international support on improving health has been rather large; the Global Fund’s own statement indicates that international support has helped Nigeria reduce deaths from malaria by 62 percent since 2000.

Halting disbursements to health programs can have serious consequences for service delivery, health outcomes, and institutional development. In light of the scale of fraud and the potential health impact, is suspending aid an effective response? And without information on health impact, how would we know?

We argue that funders may be able to escape the scandal cycle—and reduce such disruptions—by paying greater attention to information on program achievements. Currently, funders pay a lot of attention to procedural issues. For example, a 2013 report from the Special Inspector General for Afghanistan Reconstruction (SIGAR) documented weak accounting systems at the Afghan Ministry of Health. Even though the report had no direct evidence of fraud and the health program was successfully delivering services, SIGAR recommended USAID suspend the program.

By contrast, the World Bank’s 2008 Detailed Implementation Review of the Indian health sector not only included evidence of procedural failures, such as bid rigging, but also documented results failures, like continuing high malaria rates and inoperative hospitals. If the World Bank and India had reported these results failures earlier, the cases where corruption was big enough to affect programs would have come to light much sooner.

We think results on service delivery, population health, and institutional development are the key piece of information that could change the dynamics of the scandal cycle. This kind of information can help funders communicate more effectively about why they are deciding to suspend or continue aid, set appropriate standards for when aid should be halted, and establish new funding mechanisms that make it more difficult to divert funds.

We recommend the following three steps to improve funder response: 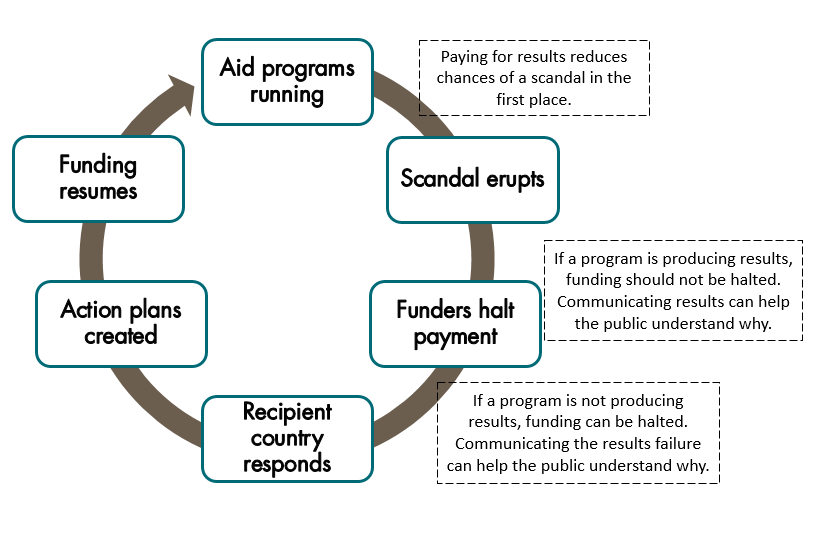 The Global Fund’s recent statement recognizes the importance of communicating the results of its health grants to Nigeria, but it doesn’t address whether it is helpful to suspend aid over a relatively small amount of fraud or lack of supporting documentation. Our paper encourages funders to incorporate information about program results into their risk management strategies so they can communicate better, detect corruption sooner, and make more considered choices about creating or responding to scandals.