by
Mead Over
and
Roxanne Oroxom
September 29, 2017

Although the Trump administration has pivoted away from global leadership in many foreign policy arenas, Secretary Tillerson’s September 19 announcement of administration support for PEPFAR’s newly released 2017 strategy is reassuring. In addition to affirming the administration’s commitment to continue PEPFAR support in all 50 previously designated PEPFAR countries, the secretary announced the intention to “accelerate progress toward controlling the pandemic in a subset of 13 countries, which represent the most vulnerable communities to HIV/AIDS and have the potential to achieve control by 2020.”

PEPFAR explicitly defines epidemic control as occurring “when the total number of new HIV infections falls below the total number of deaths from all causes among HIV-infected individuals.” The report illustrates this aspiration for Swaziland with solid lines tracing new HIV infections and all-cause mortality among persons living with HIV (PLWHA), and dashed lines projecting the achievement of epidemic control by the year 2020.

Figure 1. PEPFAR's depiction of the pathway to epidemic control 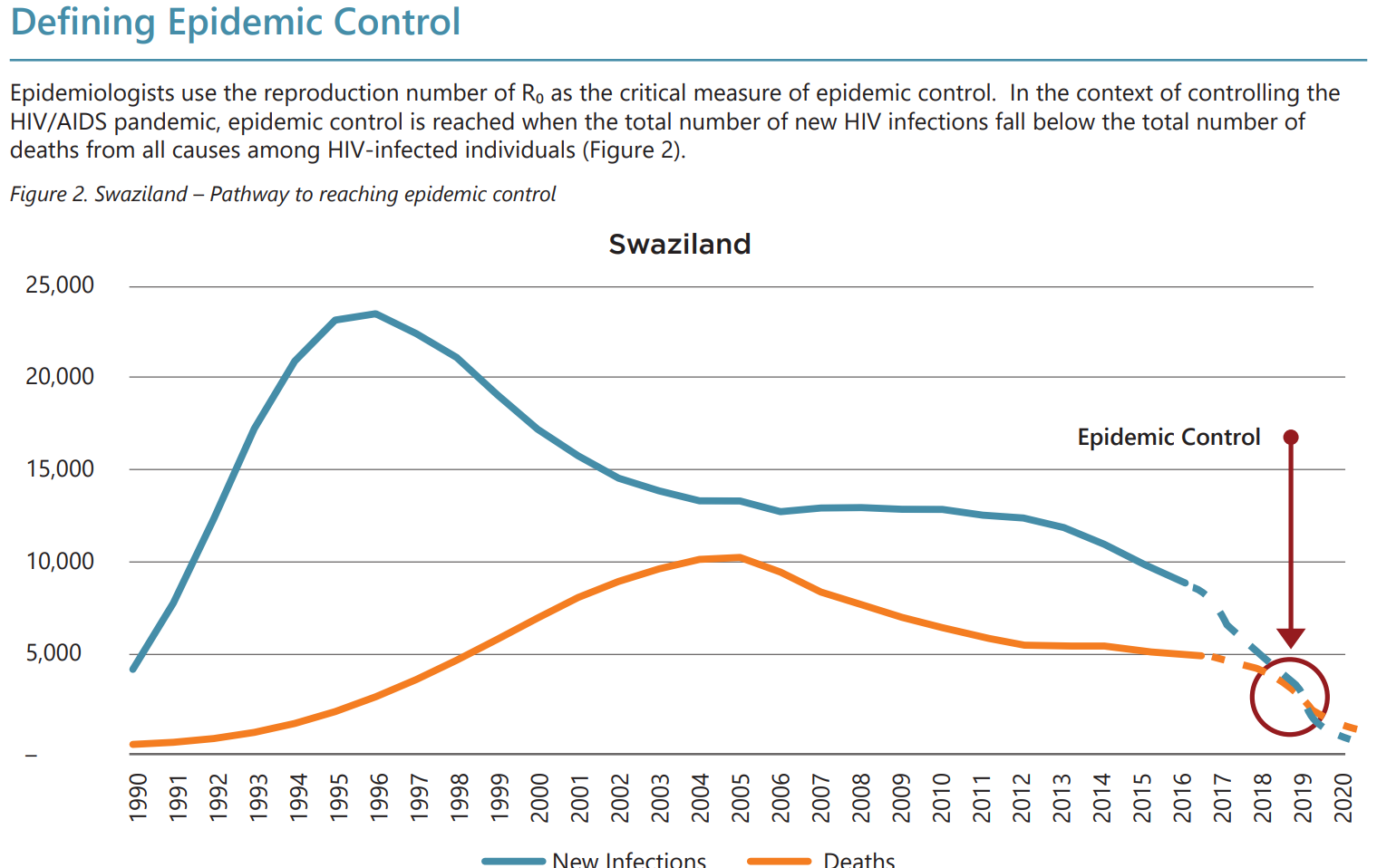 Readers who have followed CGD writings on PEPFAR for several years will recognize that this definition of epidemic control is similar to what I (Over) called the “AIDS transition” in my 2011 eponymous book. Amanda Glassman and I returned to this topic in our joint contribution to CGD’s White House and the World briefing book, where we outline specific recommendations for achieving an AIDS transition.

How is PEPFAR’s definition of epidemic control helpful to policymakers?

HIV/AIDS imposes an enormous burden on severely affected countries. The burden can be thought of as consisting of three parts: (1) the sickness burden of untreated HIV-infected people, (2) the fiscal burden of those HIV-infected persons on antiretroviral treatment, and (3) the dependency burden associated with a sovereign country’s reliance on donors to care for its own citizens. The donor-funded expansion of AIDS treatment especially by PEPFAR in 2004 reduced the first component of burden—sickness and mortality—but increased the fiscal burden (borne jointly by the donor, the recipient country, and the patient) and, to the extent that a country’s AIDS patients are externally supported, the dependency burden.

Other things equal, all three burden components are proportional to the number of people living with HIV/AIDS. The only way for all components of the HIV/AIDS burden to decline is to reduce all-cause mortality rates for PLWHA (by assuring treatment access and adherence) while simultaneously pushing the number of new infections even lower. With new infections lower than all-cause mortality within this group, the number of persons living with HIV naturally declines. This is what PEPFAR is proposing to help Swaziland achieve by the year 2020 in figure 1 above. “Epidemic control” is exactly the right goal at this stage in most countries.

Of course, reaching the AIDS transition is not the same as reaching the “end of the epidemic.” On achieving epidemic control, as depicted in figure 1, Swaziland will have approximately 210,000 people living with HIV, most of whom will be on antiretroviral treatment. But because the number of new infections will be lower than remaining all-cause mortality among PLWHA, the burden of HIV will gradually decline, becoming more affordable every year over the subsequent 10 to 20 years.

Can epidemic control be achieved in the 13 named countries?

Like figure 1 from PEPFAR’s report, figure 2 shows the challenge of reaching epidemic control in the other 12 severely affected PEPFAR focus countries. In addition to showing new adult HIV infections and all-cause adult mortality among PLWHA over the period 2000-2016, both of which are measured on the left axis, figure 2 shows the total number of persons living with HIV as a thick black line measured on the right axis. The vertical green line in each panel is placed at the year 2004, when PEPFAR launched.

Figure 2. Progress toward epidemic control in 12 of the PEPFAR focus countries 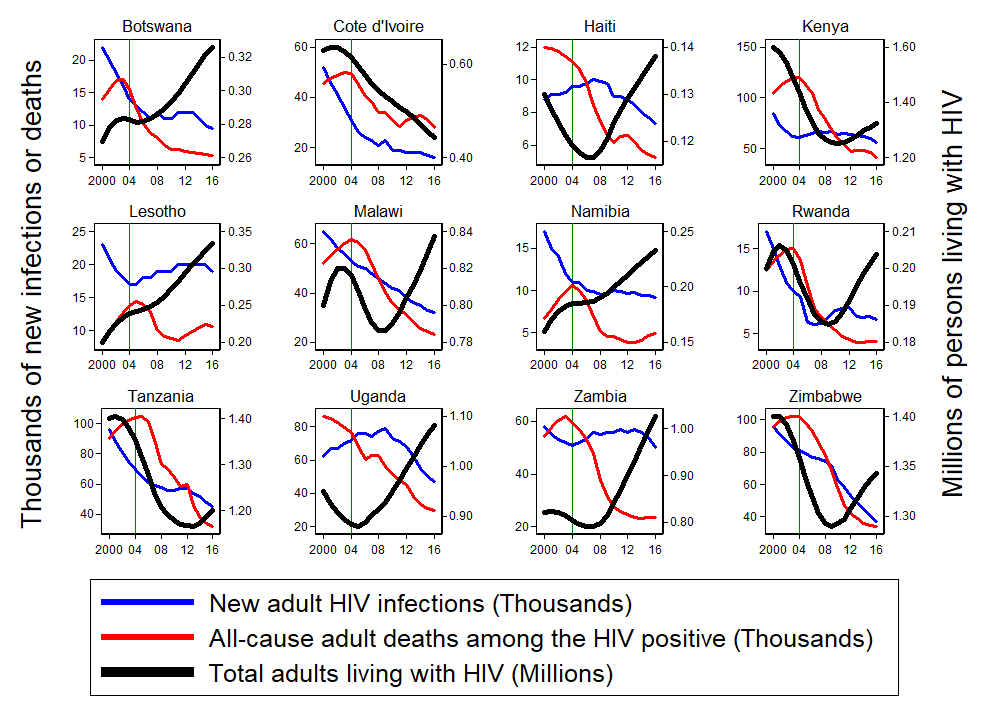 The first thing to note in these panels is that, just as was true in Swaziland, the red line plotting mortality drops markedly soon after the PEPFAR program was launched. US-financed AIDS treatment has saved thousands of lives since PEPFAR was launched.

A second observation is that PEPFAR did not appear to have such a uniformly beneficial effect on the number of new HIV infections (the blue line). Only in Haiti (which benefits from Paul Farmer’s famously resource-intensive Partners in Health intervention) and Uganda did the advent of PEPFAR precede an apparent downturn in a previously upward trend in new infections. In some countries, including Botswana, Kenya, Lesotho, Namibia, Rwanda, and Zambia, the launch of PEPFAR seems to have preceded a halt or even reversal of a salubrious downward trend in new infections. Could the accessibility of treatment in these countries have stalled prevention activities by either a biological or a behavioral channel? The good news is that, with the advent of the relatively new 90-90-90 strategy, viral suppression has sharply increased in most of these countries and is associated with recent declines in estimated new infections, especially in the last four years.

Finally note the thick black lines that show the total number living with HIV, which increases in a year when new infections exceed all-cause mortality among PLWHA. Across all 13 countries, this black line is falling only in Cote d’Ivoire. Since Cote d’Ivoire has only managed to provide treatment so far to 43 percent of those living with HIV, it has not met the first requirement of epidemic control, which is to suppress AIDS mortality.

Per figure 2, achieving epidemic control in any of the other 12 countries, so that the thick black line representing burden begins to decline, will be a substantial challenge. The advice Amanda and I offered in 2015 continues to apply to those who staff the US administration today. We recommend that PEPFAR and its partners:

Can PEPFAR close its program in a country that achieves epidemic control?

An incentive-compatible partnership contract should commit US funding for at least five and preferably for 10 years. Has PEPFAR sold the current administration on its new strategy by suggesting that the US could “turn over” financial and implementation responsibility for HIV/AIDS treatment and prevention to the 13 recipient countries in 2021? If that argument won the day, it buys the AIDS patients and the governments in these 13 countries only three years to get ready for what will be a brutal “graduation day” in 2021. Unless the recipient countries, with the help of any remaining development partners, are able to sustain the decline in their HIV burden beyond 2021, by holding new infections below mortality, the fiscal and humanitarian burdens of HIV will surge upwards again as soon as PEPFAR leaves.

Reaching epidemic control, by suppressing AIDS mortality and pushing new HIV infections even lower, is the most policy-relevant HIV/AIDS objective for the governments of recipient countries, and therefore for donors like PEPFAR. It is an essential milestone on the road to ending the HIV/AIDS epidemic.