COP26, like previous UN climate change conferences, has seen no shortage of “big round number” announcements aimed at making a splash in the press and signaling virtuous intent. Such announcements—be they promising $100 billion a year, demanding $1 trillion, or finding an additional £1 billion from the official development assistance (ODA) budget for climate finance—have the side effect of drawing scrutiny to the pledge itself and not the pledge’s impact.

In a new paper, I argue the case for developing a new pull financing mechanism for climate and development technologies, with a much stronger focus on impact and getting more for the money pledged. Such a mechanism, which would pay out on the delivery and scale-up of solutions to pre-specified problems, would focus our attention on solving big problems and paying out only when solutions work and can be scaled up.

This approach would be a departure from the vast majority of existing climate finance, and in particular, for the substantial portion of climate finance that is funded by ODA. Using ODA to fight climate change is usually a bad idea: they are not substitutes in the sense that any money spent on one is as good as spending on the other. This is particularly true of ODA spent on the mitigation of climate change (rather than on helping poor countries adapt to the effects of climate change); yet this is where the lion’s share of such ODA is going. If we are to spend more and more development money on climate change, which seems to be the direction of travel, it must be done well, and in ways that generate real development gains as well as climate benefits.

ODA for climate change is increasing, especially for mitigation (DAC donors only) 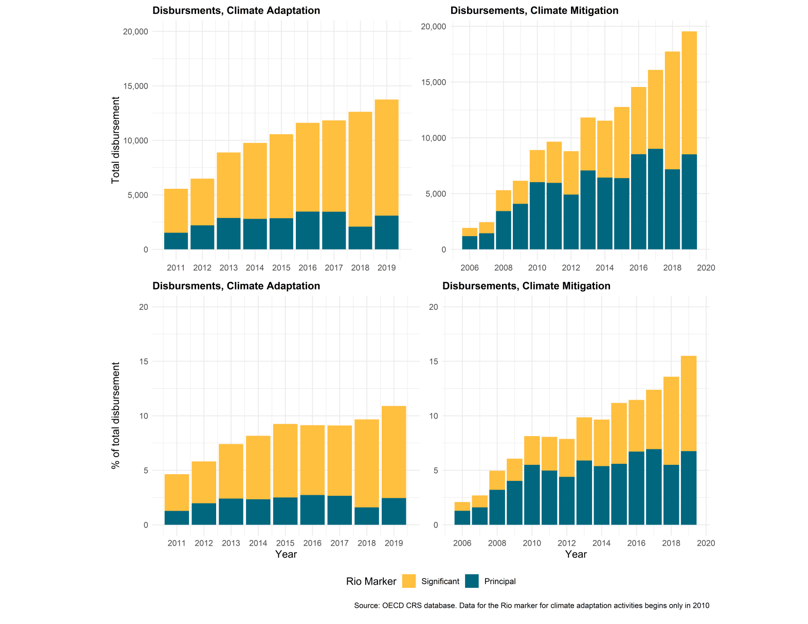 Developing a new pull financing mechanism which pays out a pre-specified price for solutions to specific climate and development challenges has three big advantages over the business-as-usual methods of getting money out the door: it helps focus effort on those areas which genuinely deliver both development and climate benefits; it pays out only when cost-effective solutions are delivered; and it provides a path to reaching the kind of scale that can make a difference.

Such a pull financing mechanism would incentivize the generation of new (or cheaper) innovations that are designed specifically for circumstances in developing countries. There is already a huge amount of private and public attention focused on climate technologies that solve developed country problems (including a new pull mechanism), but developing countries face very specific additional problems, from basic energy access to issues like stubble burning. There is much less investment in new solutions to these problems because the size of the market and ability to pay for solutions is too small, or too difficult to access for most investors to commit serious resources to them.

Navigating the Straits: Pull Financing for Climate and Development Outcomes

Similarly to how CGD previously championed the idea of an advance market commitment for a pneumococcal vaccine specifically designed for low-income countries, we need a similar effort for innovations that meet their climate and development needs. Donors can put their pledges to good use by guaranteeing the market for solutions to these developing country-specific problems, and incentivize private innovative effort to solve them.

The alternative is business-as-usual. What’s wrong with that? Well, there are three main problems:

Firstly, climate finance has typically given primacy to climate impacts—even marginal ones—over local development gains, as with the ban on fossil fuel financing for countries which produce a negligible volume of emissions at the cost of meeting their own energy needs. A pull financing mechanism will need to specify both the climate and the development returns it is paying for, allowing for a focus only on problems where there is both a genuine development gain to be had and a strong climate angle.

Secondly, there is surprisingly little evidence on how cost effective most climate spending is. A pull financing mechanism pays out only on pre-specified results—setting minimum standards for the effectiveness and cost-effectiveness.

And thirdly, with the majority of innovation for climate-related technologies in developing countries financed through ex ante grants (“push” financing) there is relatively little incentive to achieve scale in deployment: such grants reward effort into developing technologies rather than the extent of their ultimate use. A pull financing mechanism can specify pay out on the condition that the innovation that nominally solves a climate and development problem is actually bought and used by final consumers in sufficient numbers to make a real difference.

Such a mechanism has enormous potential to solve big problems that have so far resisted resolution; but it needs to be aimed at the right problems, and structured carefully to maximise its chances of success. In my paper I suggest five tests to judge whether pull financing is the right solution to a given problem:

Based on an initial consideration of these criteria, there are a number of promising applications for a new pull financing facility. I suggest that affordable and scalable solutions in the following sectors (and others covered in this paper and in forthcoming work) have the potential for huge climate and development gains—if the right contracts can be designed.

A future paper will examine these and other potential applications in detail, but what they have in common is that each has both a strong development and a strong climate angle, and that the appropriate solution either does not yet exist or is not yet sufficiently attractive to users to incentivize widespread take-up.

A pull mechanism can be designed to either move the technology available forward or make production and delivery of existing technologies cheaper and more reliable. If more and more financing is planned for the confluence of climate and development challenges, the need to find the right problems to target and the right mechanisms to incentivize progress is urgent.