Chart of the Week #6: Gas Is Too Damn Cheap | Center for Global Development | Ideas to Action Skip to main content

Chart of the Week #6: Gas Is Too Damn Cheap

Fuel subsidies are bad for the planet, expensive, and often regressive. With new, high-frequency price data researchers explore why they’re also so hard to kill.

Economists rarely reach the kind of consensus that we see on the topic of fuel subsidies. Bottom line: they’re a really bad idea.  On the one hand, they encourage us to burn more fossil fuels and kill the planet, and on the other hand, they’re a massive drain of fiscal resources—equivalent to 6.5 percent of global GDP according to the most eye-popping IMF estimates—that are very poorly targeted at the poor.

Yet attempts to roll back subsidies often provoke strong political backlash. Movements from the Arab Spring in Jordan to Occupy Nigeria have marshalled popular resistance to raising fuel prices, and generally won.

So in the wake of the Paris accord, are countries doing anything to unravel these inefficient subsidies? At a CGD event this week organized by my colleague Todd Moss, Michael Ross of UCLA presented his multi-year project with Paasha Mahdavi of Georgetown and others to gather high-frequency gasoline prices from 157 countries around the world since 2003.

Global fuel subsidies are falling—but mostly due to a falling market price in the face of fixed price ceilings, not politically difficult reform

Two things jump out from the visualizations of their data that Ross, coauthor Chad Hazlett, and Mahdavi present in their recent paper in the journal Nature Energy.

First, the price you pay at the pump in most countries is higher than the global benchmark price of fuel, i.e., most countries are net taxers—not subsidizers of fuel.  As it turns out, 95 percent of global fuel subsidies are concentrated in just 22 countries, all of which are also oil exporters. (Note the definition of a subsidy here is more restrictive than the expansive definition that IMF researchers use to get to 6.5 percent of GDP.) 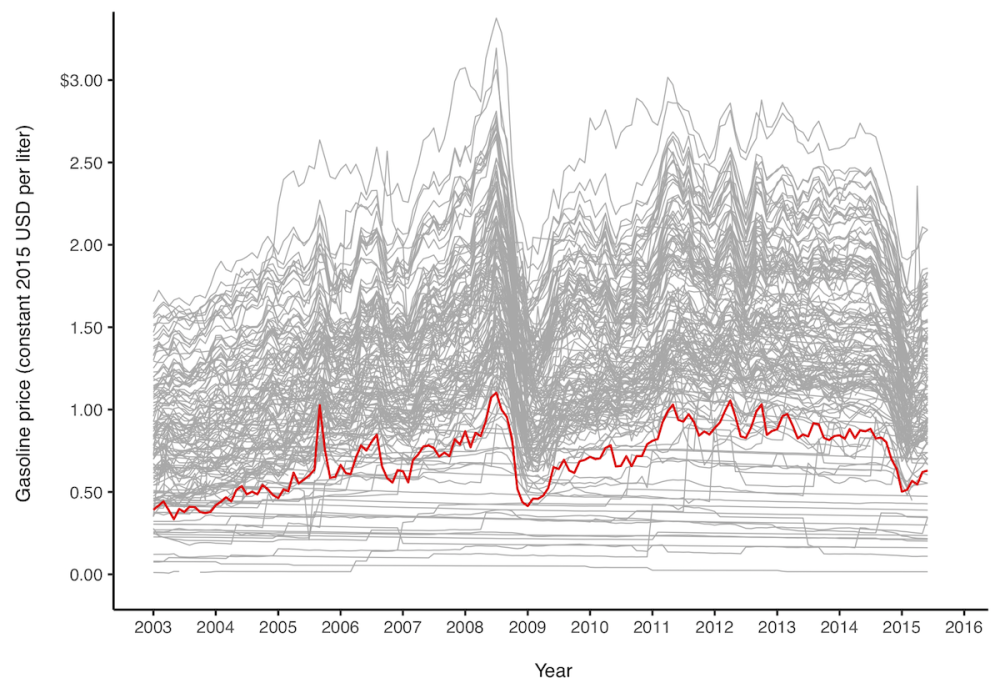 Source: reproduced from Ross et al (2017): “Individual country price trends are shown in grey, and the global benchmark price is plotted in red. Countries fall into two groups: those with prices above the benchmark (who tax gasoline) and those below it (who subsidize it). The overall shape of many trend lines is driven by changes in benchmark price. In general, countries that tax gasoline also allow the price to fluctuate in tandem with global prices, while those that subsidize gasoline keep their prices fixed for long periods. All prices are in constant 2015 USD per litre.”

Second, the lower lines are much less squiggly. That means that countries which subsidize fuel, by charging a retail price below the world price, tend not to let the price move with market fluctuations—whereas taxes are more often defined in proportional terms.

Fixing the retail price has an interesting side-effect: when the world price of fuel drops, the subsidy—defined as the gap between the world price and the retail price—automatically falls. Cheaper gas masquerades as subsidy reform! Mahdavi et al note that most reductions in fuel subsidies since 2014 have come from this phenomenon—which is fine from a fiscal perspective, but isn't going to save the planet or our lungs from air pollution. 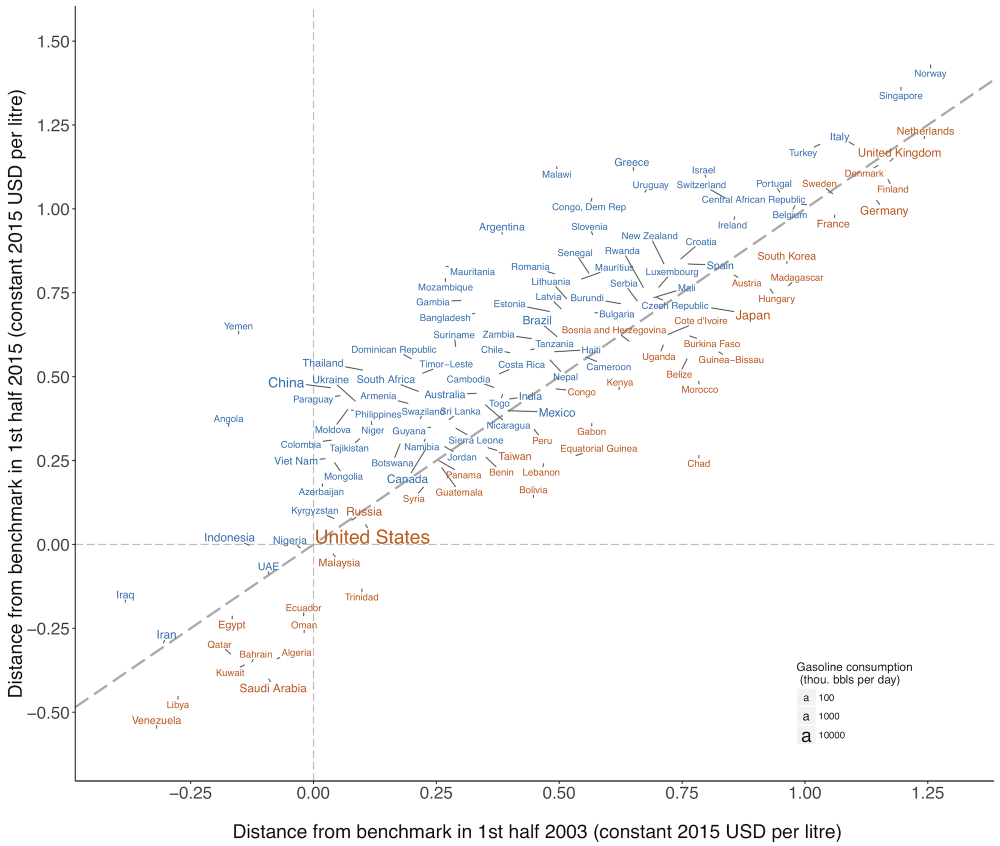 Source: reproduced from Ross et al (2017): “Eighty-three countries increased their net taxes or reduced their net subsidies between the first six months of 2015 and the first six months of 2003; they are shown in blue and lie above the 45◦ dashed line. By contrast, 46 countries reduced net taxes or increased net subsidies over the same period, and are shown in dark orange below the 45◦ line. While most countries had net taxes in both periods (placing them in the upper-right quadrant), 14 countries had subsidies in both periods (placing them in the lower-left quadrant). Just two countries changed from net taxers to net subsidizers (lower-right quadrant) while two others changed from net subsidizers to net taxers (upper-left quadrant). Text size is proportional to average gasoline consumption.”

Overall, are things getting better or not? The short answer is yes, but slowly. From 2003 to 2015, most countries started and ended as net taxers. And countries gradually raised gas taxes, shown by the cloud of names above the diagonal line in the upper-right quadrant. But most countries who started off with net subsidies kept those subsidies, as see in the population of the bottom left quadrant relative to the upper left.

So why do governments subsidize fuel? And why are climate-killing, anti-poor subsidies considered vaguely left-of-center and populist?

The proximate cause is obvious: attempts to remove subsidies are often met with angry protests. Subsidies are politically popular. But at a deeper level, why?

Trust in government appears to be one factor. In a forthcoming paper in Comparative Political Studies, Jordan Kyle looks at public support for replacing fuel subsidies in Indonesia with a targeted transfer program—in which, crucially, monies would have to pass through local government. Kyle documents large variation in corruption in existing programs and finds that this corruption is highly predictive of support for fuel subsidy reform. In villages where transfers tend to go missing, poor households in particular would prefer to keep inefficient fuel subsidies than move to a transfer system.

In a separate project in Tanzania with colleagues Nancy Birdsall, Jim Fishkin from Stanford, and Mujobu Moyo, we found hints of a similar dynamic: citizens who have more trust in the current government were more supportive of exporting Tanzania’s recently discovered natural gas reserves and using the money for other purposes—whereas those with low trust were somewhat more inclined toward using the gas on shore or subsidizing fuel.

The technocratic hope, embodied in India’s Aadhaar system of biometric identification, is that new technology will make it possible to replace inefficient subsidies with reliable electronic transfers that don’t leak and are beyond the reach of local corruption and rent-seeking. My colleagues Neeraj Mittal, Anit Mukherjee, and Alan Gelb have documented in detail how the Indian government has pursued this goal with the reform of cooking fuel subsidies. The politics of Aadhaar remain contentious to say the least.

Using their price data, Ross and Mahdavi have now turned to exploring the determinants of successful (i.e. lasting) reform, asking who raises the retail price of gas and when? That work is still in process, but preliminary results suggest a few factors. Reform is more likely when prices are low (so a price hike is less painful), countries face sovereign risk (so the expense of subsidies bites), and elections are far off.

At the end of the seminar, Ross noted that so far their model has very little explanatory power. A slew of political and economic factors can't seem to predict when fuel subsidy reform will happen. And that seems to be a good metaphor for experts’ understanding of this topic more broadly. Fuel subsidies are bad economics. They cost gobs of money, increase carbon emissions, and fail to reach the poor. But they remain popular, often with the people we think benefit the least.