Cashing In on Coal

India is getting some serious cash from coal. According to official estimates, the government will get nearly $250 billion in revenues over a period of 30 years from the sale of over two hundred coal blocks to private bidders, only 29 of which have been auctioned so far. Nearly all of the auction money and royalties will go to six of India’s poorest states and, within them, to about two dozen districts where the coal deposits are located. Given India’s record of corruption and mismanagement of natural resources, it is difficult to be optimistic that it will be able to cash in on this windfall and use it for development. But there are a few silver linings in the grey cloud that may prove us (happily) wrong: 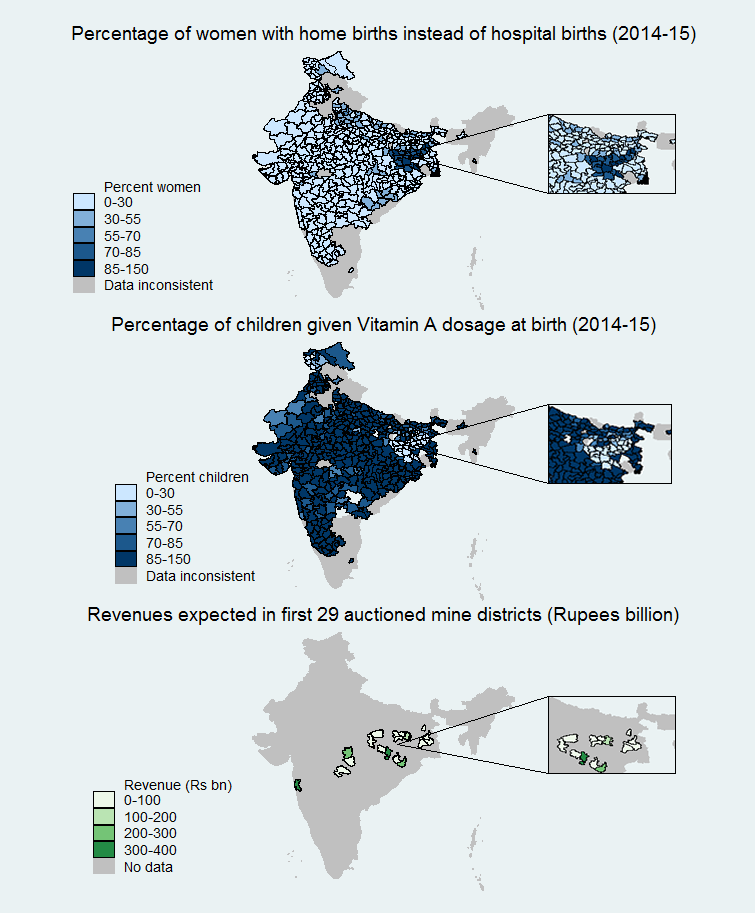 According to the World Bank and IFC, despite health and environmental risks posed by large-scale coal mining, there can still be overall health gains in mining districts if spending is targeted towards providing health care. A significant part of the mining revenues, therefore, needs to be prioritized for health for two reasons: first, to correct for a general deficit in health outcomes in these districts, and second, to address long-term health impacts from local mining activity.

This is certainly achievable. Some estimates put the current annual revenue from the coal auction in Chhattisgarh state at two-thirds of the total health budget, which will increase as more blocks are auctioned over the coming months. Our estimates indicate that the annual per capita royalty already accruing to the district of Raigarh is Rs.1500 (about $25), nearly equal to the per capita expenditure on health for the state, according to the latest budget. Empowering local communities and involving them as stakeholders is crucial to ensure that the natural resource dividend is spent on the right things, in the right way.

Fortunately, the recently amended Mines and Minerals (Development and Regulations) Amendment Bill, 2015 addresses this issue. The law states that in any district affected by mining operations, the State Government shall establish a trust as a non-profit body – to be called the District Mineral Foundation (DMF) – with the objective to work for the interest and benefit of people affected by mining operations. Moreover, the holder of a mining lease shall pay the DMF of the district up to one-third of the royalty, according to rules created by the Central Government.

Not much has been said until now about the how the DMFs will function. However, India is not the first to attempt a local revenue sharing scheme and can learn from lessons of other countries. According to Natural Resource Governance Institute, there are at least 30 systems around the world that have established subnational resource revenue sharing systems. In Peru, for example, mining companies contribute directly to local development projects through social funds and voluntary contributions to the Peoples’ Solidarity with Mining Program. According to one study, nearly 20 percent of the funds were spent on health, 15 percent on education and the rest on infrastructure, training, and employment generation.

The impact of the expenditure is, however, unclear. There are pervasive issues of transparency and accountability; monitoring compliance with legal obligations of African mining projects, for example, has proved to be extremely difficult. More often than not, good intentions are not translated into better outcomes for the people who are most affected.

More recently, CGD has proposed an initiative known as “Oil-to-Cash.” As our colleague Todd Moss has observed, Oil-to-Cash can be used to combat the resource curse by transferring some or all of its natural resource windfall revenue to citizens in a universal, transparent, and regular payment. The potential for Indian coal revenues is obvious. This could strengthen the social contract, fight corruption, and lay the foundation for future prosperity. It also gives people the choice to use the resources that are rightfully theirs!

India has the chance to use a natural resource often derided as dirty to make a real difference to the welfare of millions of its poorest citizens, who rank among the poorest people on earth. Innovative ideas like this can make the difference between development and destitution – but only if they are backed by transparent and accountable government.