Better Ways to Use Aid in Middle-Income Countries 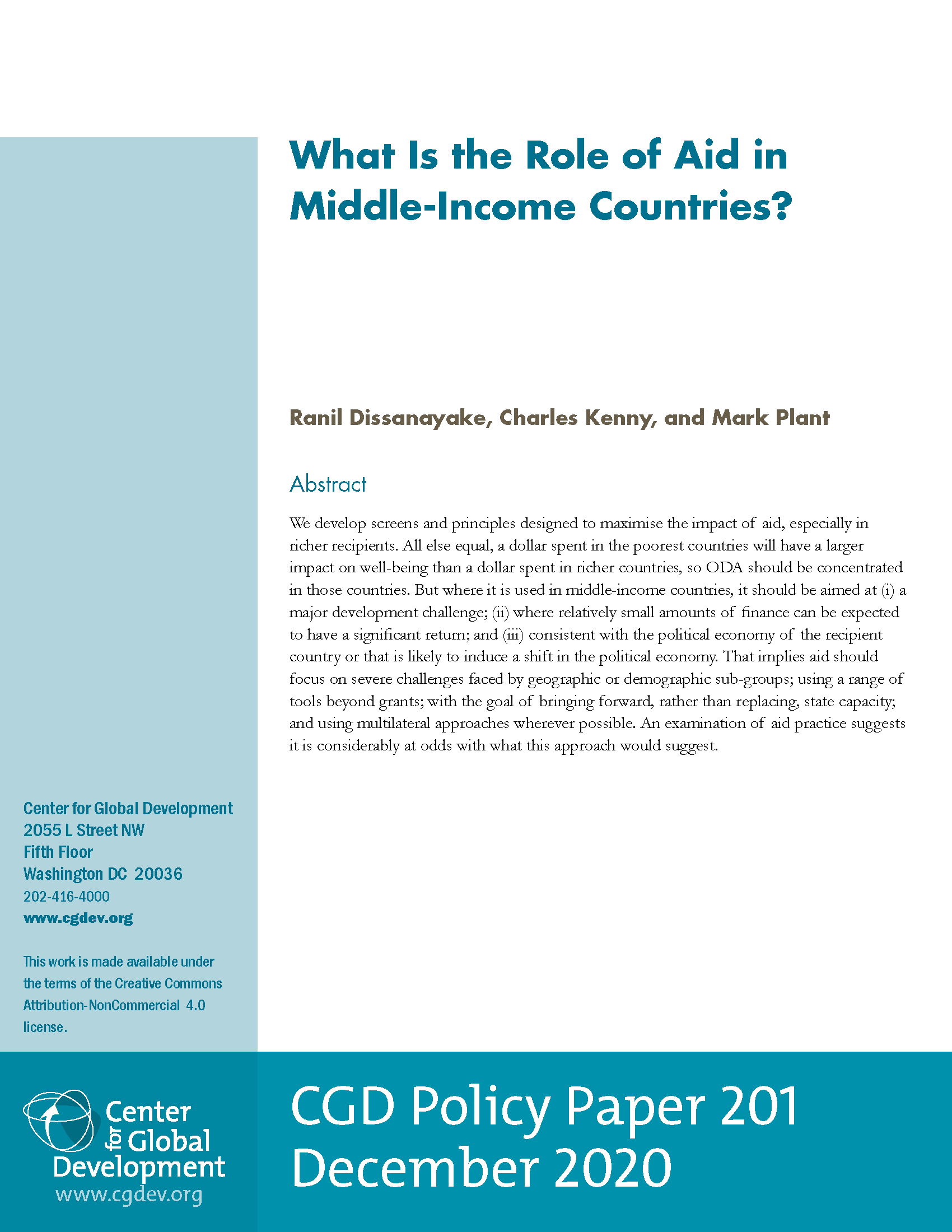 What is the Role of Aid in Middle-Income Countries?
Ranil Dissanayake et al.
December 21, 2020

Official Development Assistance (ODA) is to be spent for the economic development and welfare of developing countries. The definition of what constitutes a developing country is broad, to say the least, with ODA being spent in countries as rich as Oman as recently as 2010, when it had a per capita GNI of $18,500. And currently only about 25 percent of ODA is spent in the poorest 26 countries of the world, with about eight percent going to countries classified as upper middle-income countries. Even though this has been the case for a long time (see figure below), this skew of ODA to richer countries surprises many observers: at a prima facie level it seems that scarce aid should be spent in the poorest countries which are home to the world’s poorest people.

In a new paper published today, we examine the distribution of aid among countries at different income levels and focus on the aid going to middle-income countries (MICs). 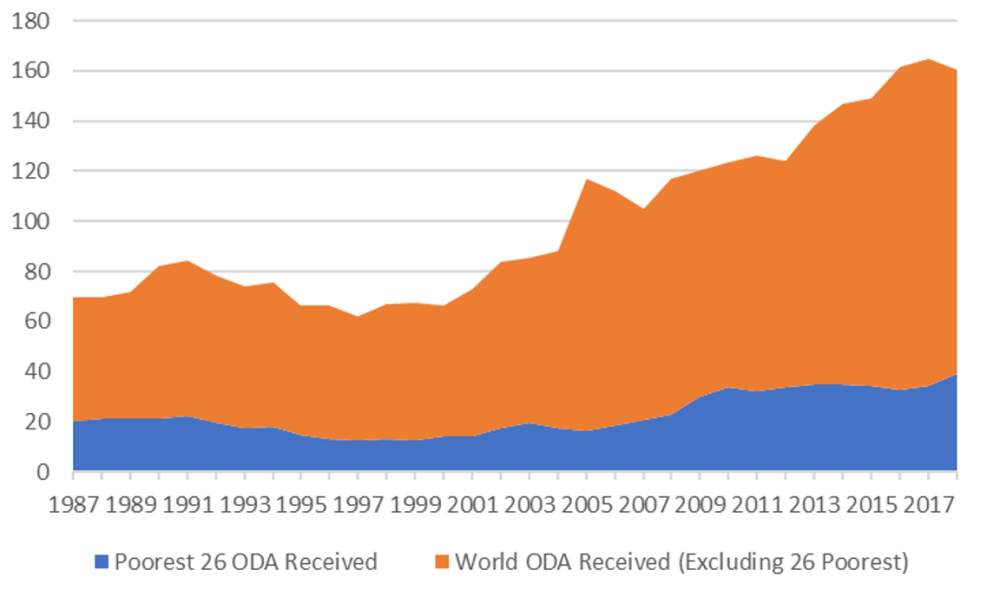 Source: World Bank Development Indicators (constant 2015 USD). Note: This graph plots the total amount of ODA per year, and highlights that allocated to the poorest 26 countries in that year. We use 26 countries as they represent around 10 percent of the global population in most years. From 1987-1993 they represent a substantially larger share, however, due to the presence of China and India in this group. From 1994 onwards, the percentage of global population in the poorest 26 countries ranges from 7-11 percent.

Donors should focus ODA on the poorest places.

The poorest countries in the world see the worst development outcomes—in poverty, health, education, and other social indicators. All else equal, a dollar spent in these countries will have a larger impact on wellbeing than a dollar spent in richer countries. And “absorptive capacity” is not an excuse to spread funding to much richer countries: ODA is not large enough to push at the capacity frontier of poor countries: spend all of global ODA in the poorest 50 or so countries, and it amounts to around 1/12th of their collective economies; spend it in the poorest 60 or so and it becomes around 1/25th.

But ODA will continue to be spent in MICs.

It would be naïve to expect countries to completely abandon such spending, which is often driven by geostrategic priorities and historical ties. And there are poor people with real problems in MICs and ODA might be effectively used to help them. But if ODA is small relative to the size of low-income countries’ (LICs) GDP, it is miniscule relative to the MIC economies. So, a relatively little bit of ODA will have to go a long way if it is to be spent in MICs rather than LICs.

ODA should be used in MICs only when it clears three screens:

There are far more uses of ODA that clear all three of these screens than there is ODA, so prioritization will still be necessary. These screens provide a starting point for thinking about how to maximise the value of ODA used in MICs.

Do donor practices reflect these screens and principles?

If these principles were adhered to, we would expect that ODA would look different in richer than poorer countries: using generally less grant ODA, in smaller projects, focusing on different sectors, and using different instruments and more multilateral delivery. Perhaps unsurprisingly, actual practice is rather different from what our approach would suggest.

First, ODA is not primarily focused on the poorest countries—instead, as we saw in figure 1, it has fluctuated over time, but a substantial portion of ODA goes to relatively richer places.

Second, contrary to our suggestion that ODA should be used in smaller projects in richer countries, the average project commitment size declines only gently as recipient incomes increase. Most ODA projects everywhere are extremely small, with global ODA dominated by a few very large projects, regardless of the income of the recipient country.

Third, neither the distribution or instrument used for ODA differs markedly across income class of the recipient. And the use of different instruments for ODA delivery is driven by the sector, not the income of country. Nor are multilateral delivery channels more common in MICs—in fact, the opposite is true.

In the end we conclude that the trend in ODA has largely been contrary to the screens and principles we put forward. Donor rhetoric increasingly suggests that the rules constraining ODA to be used for the welfare of the poor will be put under pressure. The temptation to use aid, ostensibly earmarked for the poorest, to solve collective global problems is increasing. ODA is designed to improve the welfare of people in developing countries and it still has a vital role to play when ten percent of the planet still lives on less than $1.90 a day, millions more are out of school and/or die from easily preventable medical conditions. ODA is far too valuable a resource to waste and donors need to think harder about how they use ODA in MICs.