Better Together: Finance and Health Ministers Can Deliver a Win-Win for their Countries

This blog post is part of a series on Universal Health Coverage (UHC) originally published by the World Bank here. The series includes contributions from external bloggers and reflects their views. Follow the conversation on Twitter #HealthForAll

The G-20’s recent call for finance and health ministries to collaborate in pushing toward Universal Health Coverage (UHC) is both overdue and welcome. Without such collaboration, the necessary decisions cannot be made for raising substantial resources and spending them effectively. But it is also a collaboration that holds promise for preventing much of the disease and death that is looming on the horizon, especially in today’s middle- and low-income countries. Everyone wins when countries can generate more health for the money —an effort that demands joint action by the people who raise funds and those who spend it. Countries also get a win-win from raising taxes on harmful products like tobacco, alcohol, and sugary beverages by preventing unnecessary disease and by raising revenues.

The communiqué that was issued at the G-20 meeting concisely points out the challenges countries face in trying to reach UHC, especially the rising burden of non-communicable diseases (NCDs) and the increasing demands for healthcare services. Two background documents, the “Shared Understanding” and “High-Performance Health Financing for UHC” (a World Bank report) are more detailed about the need for finance and health ministries to collaborate with special attention to mobilizing enough funds to universalize healthcare—some $176 billion annually. The Japanese government took these findings forward by hosting a joint meeting of finance and health ministers this past June to build commitments for further action.

Health taxes are a particularly obvious part of this multi-sectoral agenda, both as a way to prevent NCDs and to raise domestic revenues. "High-Performance Health Financing for UHC" estimates taxes on tobacco, alcohol and sugary beverages could raise some $12.3 billion in annual revenues for 54 low- and middle-income countries, contributing a small share but still significant amount of funding for UHC. These estimates extend work done for "Health Taxes to Save Lives" (a report from the Task Force on Fiscal Policy for Health that was co-chaired by Mayor Michael Bloomberg and Secretary Lawrence Summers) which estimates such health taxes could prevent about 50 million premature deaths and raise some $20 trillion in revenues over the next fifty years worldwide. But all this is only possible if finance and health ministries act together to raise taxes on these products.

In most countries today, non-communicable diseases account for most of our health problems and premature deaths. Without tackling three risk factors—smoking, alcohol consumption, and obesity—the world cannot reach Sustainable Development Goal 3 to “ensure healthy lives.” The number of smokers continues to rise in low- and middle-income countries, is associated with about 8 million premature deaths every year, and will contribute to some 1 billion premature deaths over this century without significant action. Alcohol consumption is currently associated with about 3 million deaths every year, a burden which will grow if current consumption trends continue. Obesity and diabetes are associated with about 4.5 million deaths every year, and sugar consumption is increasingly recognized to be a critical factor in this growing epidemic. All three of these risk factors have one thing in common: reducing consumption prevents disease and saves lives. And taxes are an effective way of reducing consumption in all three cases. Lawrence Summers highlighted this point when he wrote, "If we want to improve global health, we need to tax the things that are killing us." 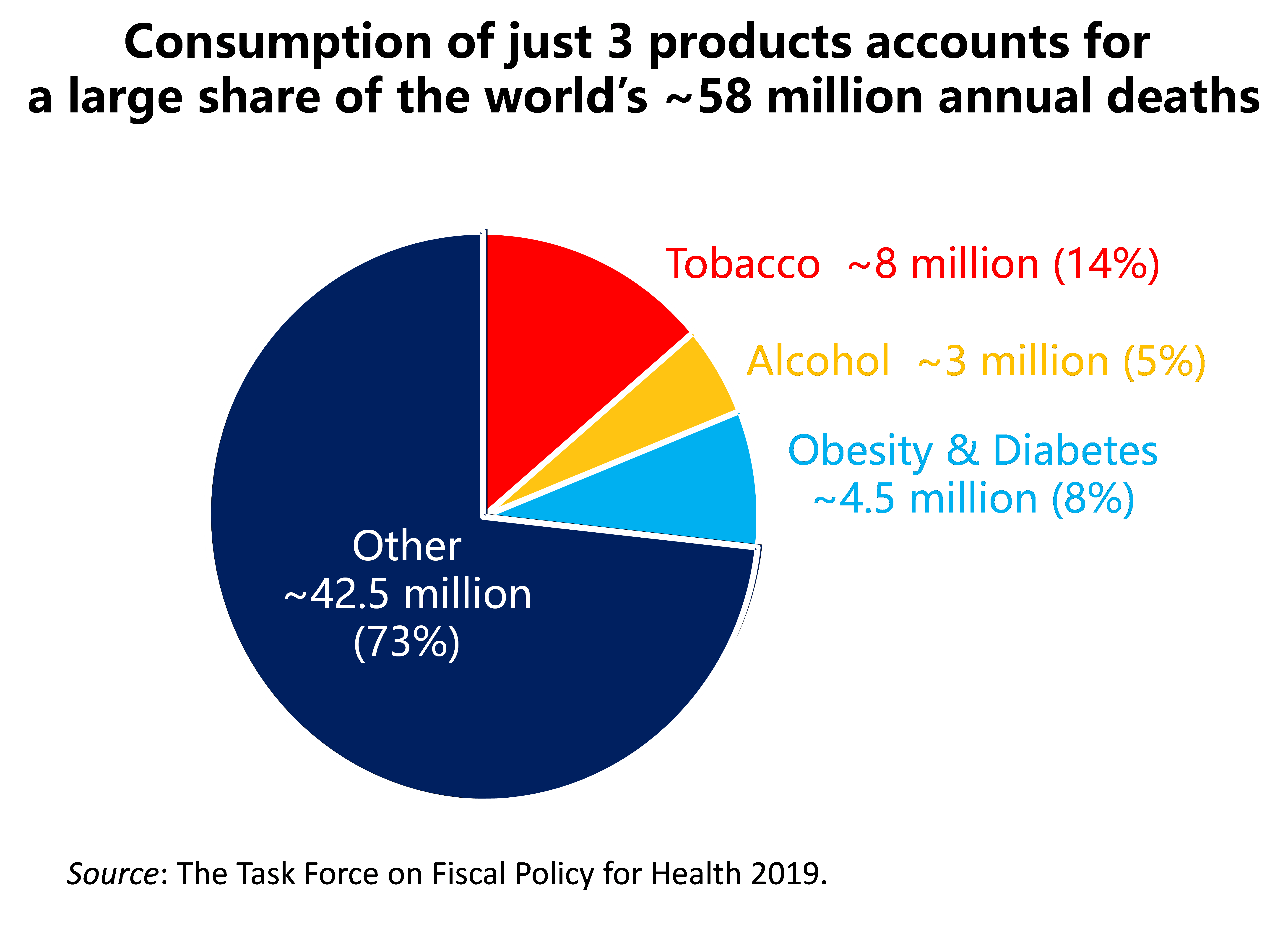 A second win from health taxes is the additional revenues they raise. Unlike most other health interventions that require up-front investments from finance ministries, health taxes are a net gain for the treasury. The amounts are not likely to be as large or as sustainable as property or income taxes but they can still generate significant funds. Experiences over the last two decades show the potential. For example, Mexico—which has a peso-per-liter tax on sugary beverages—raises about 0.5 percent of its GDP from taxes on tobacco, alcohol, and sugary beverages. South Africa and the Philippines raise even more revenues from these health taxes as a share of GDP, almost 1 percent.

Taxes that prevent disease while raising revenues? For public policy options, it doesn’t get much more compelling than that! And yet their potential remains unexploited. One reason for this is that finance ministries have not been sufficiently engaged in this debate, or in the broader conversation on the future fiscal implications of health policy choices being made today. The G20's call to engage in this debate is a good start. Finance and health ministries will have to follow up by broadening the conversation, appreciating each other's perspectives and working together towards a common goal of better health and fiscal sustainability for their countries.

The Covid-19 pandemic has led to large budget gaps in low- and middle-income countries, with revenues projected to be reduced for years to come. This is the moment for policymakers to consider whether health taxes—levied on tobacco products, alcoholic and sugar-sweetened beverages, and polluting fuels—can play a part in boosting revenue while also supporting better health