Addressing Cross-Border Spillovers in Data Policy: The Need for a Global Approach

Global debates about data governance standards have primarily reflected the priorities and needs of rich countries, with less wealthy countries left in the role of “standards takers.” More needs to be done to ensure that digital governance policies pursued by the world’s largest economies do not create unintended consequences that make it harder for other countries to support a strong domestic digital economy and participate in the global digital economy.

The COVID-19 pandemic has altered our lives in myriad ways, including by increasing our reliance on online platforms, digital tools, and data (e.g., telehealth, online learning, and the growing use of high-frequency data to monitor the spread of disease and the effectiveness of policy responses). Although countries set off from different starting points and are digitalizing at different speeds, virtually all accelerated on their path towards greater digital dependence last year.

As societies have become more reliant on data and digital tools, they have also become more attentive to the associated risks. 2020 merely continued the trend of mounting concerns over the disruptions that occur when digital space is poorly governed, including through the misuse of personal data, surveillance, algorithmic bias, economic concentration, and the rapid spread of misinformation.

How GDPR became the model

Governments worldwide are still in the early stages of deciding how they want to govern digital spaces. For many of them, establishing data privacy and protection laws is a first step in developing a broader approach to digital governance. The adoption of such laws has sped up dramatically in recent years, catalyzed by growing concerns about online harms, surveillance, and the passage of the European Union’s General Data Protection Regulation (GDPR) in 2016, which provided a more rigorous model for protecting the privacy of individual data, including much greater fines for non-compliance, than had previously existed.

The GDPR’s global influence is impossible to overstate. Of the more than sixty countries that enacted new data privacy laws last decade—most of which are in Africa, Asia, and Latin America—almost all modelled their approach on the GDPR and its predecessor, the EU Data Protection Directive. The widespread adoption of the GDPR model reflects both growing awareness of the risks of data misuse and a desire by countries to achieve compliance with the Regulation’s adequacy framework, which requires the European Commission to determine whether non-EU countries “provide a level of protection for personal data which is comparable to those of EU law” as the basis for transferring data. 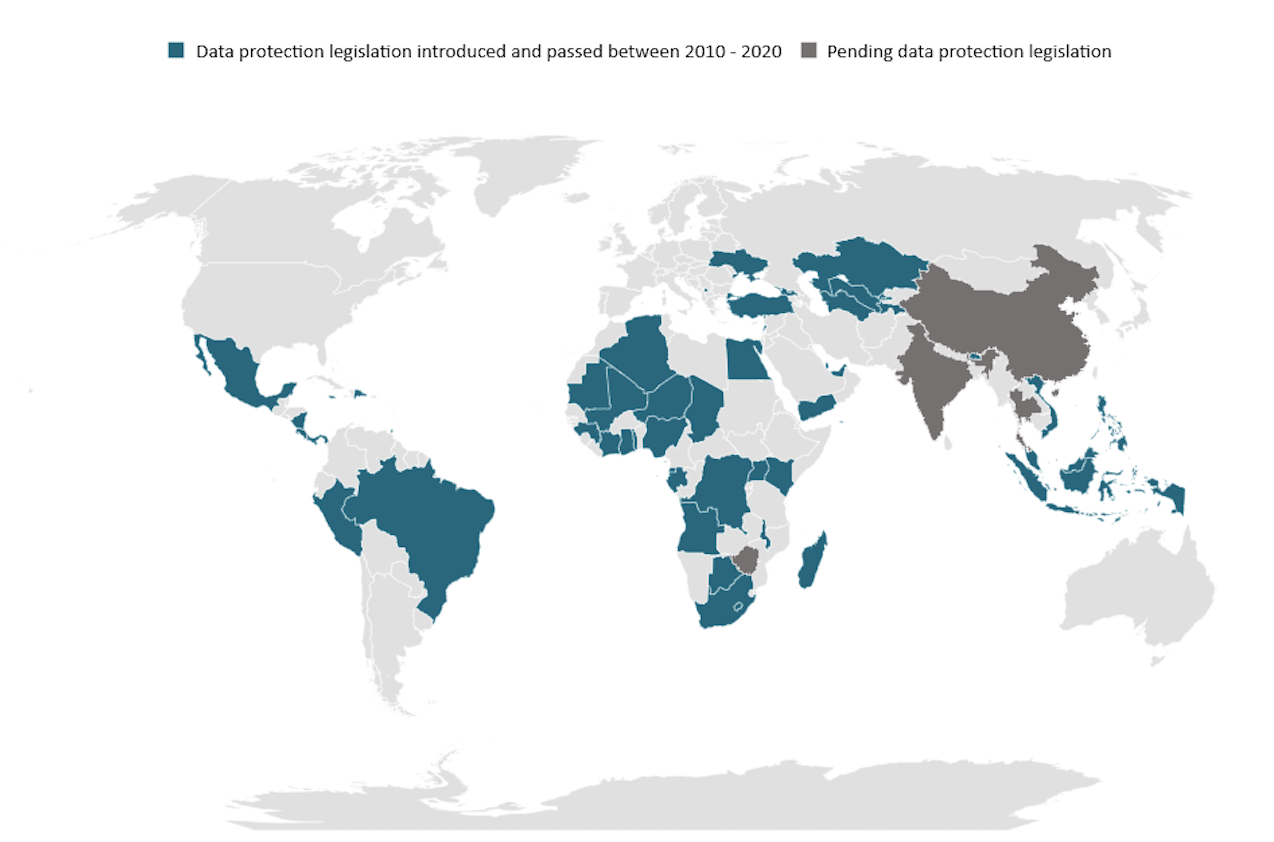 Having governments take data privacy risks seriously and develop frameworks to address them is welcome. But there are concerns that the GDPR model is a poor fit for many countries because of its breadth and complexity. Our research suggests that the gap between data protection “laws on the books” and effective implementation remains wide in many countries, resulting in regulatory uncertainty that can hinder useful data innovation by both the public and private sector.

The GDPR’s extraterritorial compliance and adequacy framework also raises a risk of creating a two-track digital economy, since resource-constrained governments may find it more difficult to receive an adequacy decision from the European Commission, increasing the cost for domestic firms that seek to access the EU digital market (for example, a recent report estimates that UK firms would face an aggregate cost between $1.4-2.2 billion if the UK does not receive an adequacy decision following Brexit).

How the data governance landscape will change in 2021

It is important to address these issues now, as 2021 is poised to be a momentous year for data governance reform. Consider the following events that may take place:

Together these events have the potential to reshape the global data policy landscape. And while only a handful of countries will decide their outcome, the decisions they reach will largely determine the set of regulatory options available to policymakers globally.

The concept of cross-border spillovers (or externalities) is commonly used to examine how actions and events in one country can produce intended or unintended consequences in others. In sectors like health and finance where such spillovers can be significant and fast-moving (e.g., financial crises and viral pandemics), national governments have collaborated to create global institutions (like the Financial Stability Board and World Health Organization) to mitigate their risk, including by promoting the harmonization of standards across different jurisdictions and monitoring the buildup of systemic vulnerabilities.

It is well-established that regulatory policies enacted in one country can have adverse effects on others, whether or not they implement the same reforms. A 2018 World Bank study of G20 financial regulatory reforms suggested that financial reforms undertaken by G20 countries had “unintended economic and social spillover costs for individual emerging markets and developing economies (EMDEs).” Similarly, CGD’s Task Force on Making Basel III Work for Emerging Markets and Developing Economies highlighted how Basel III capital standards may have made it more difficult for EMDEs to access loans from advanced economies.

Data policy experts have long debated how different approaches for determining the legality of cross-border data transfers affect economic and security outcomes. But the field as a whole has not grappled with how regulatory actions taken in one country (or not taken, as in the US approach to governing digital platforms) can lead to broader spillovers in others—and how to best manage this.

At the moment, countries are struggling to translate de facto global standards on data privacy and protection into local contexts, creating a risk that their citizens’ data may not be adequately protected and a hurdle for the development of their domestic digital economies.

While there is broad agreement on the principles put forward in the OECD Guidelines on the Protection of Privacy and Transborder Flows of Personal Data and Convention 108+, guidance on how to implement these principles effectively and in a manner flexible enough for them to be tailored to the priorities and capacities of different governments is lacking. Developing such practical guidance would be enormously valuable for governments seeking greater clarity on how to best implement these principles. At the moment, however, the institutional arrangements needed to support coordination between government officials working on data policy at the global and regional levels remain underdeveloped.

To address this gap, we intend to hold a series of events in 2021 to bring together policymakers and experts working on data policy in both “standard-making” and “standard-taking” countries to discuss whether existing approaches for implementing data privacy principles match the needs and priorities of resource-constrained governments and, if not, what the consequences are and what should be done to address them. We will also explore ways to amplify voices from low and lower-middle income countries in discussions on data governance standards at the global level.